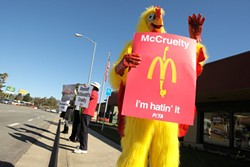 The controversial People for the Ethical Treatment of Animals (PETA) is no stranger to tension. Members stage a demonstration, and the air gets thick. Such was the case when a group met outside a local McDonald’s to protest the restaurant’s relation to poultry farms they described as “inhumane.”

Members and volunteers with the young adult division of PETA, PETA 2, held signs and waved to passersby on a public sidewalk at noon on Dec. 8 outside of the restaurant at 275 Madonna Road.

The protest was received with a mixture of supportive honks from passing vehicles and disapproving looks from customers. McDonald’s staffers wouldn’t comment on the protest, but one employee, dressed in casual wear and identifying himself only as Bob, shook his head and said the protesters were “good for business.”

Bob, who said he wasn’t the manager, later asked New Times’ photographer to step off the grass—restaurant property—while documenting the protesters. He also asked a New Times reporter to leave the premises as the reporter sought comment from the manager.

PETA has long been an outspoken critic of meat processing, but the latest event was aimed at the slaughter methods employed by the restaurant chain’s poultry suppliers.

“We’re basically out here to spread the word that if people buy from McDonald’s, they’re supporting an industry of cruelty to animals,” said PETA 2 tour manager Joey Thorpe, who participated in the event.

Thorpe explained that more humane, cost-effective methods than are currently used to slaughter chickens are available, but are seldom used by major poultry farms. He cited a method that uses inert gases to kill birds before slaughter.