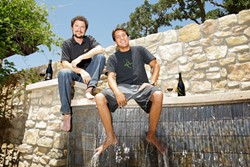 I love wine in all of its varieties, colors, and textures, from most producers. But I do not love all varieties equally, particularly Petite Sirah. This masculine, tannic variety has such brawny, beefy characteristics, I describe it as the stevedore of wines. And they’re usually so deeply colored they stain your mouth and teeth. I’ve heard winemakers candidly describe it as wine that will take the enamel off your teeth. In years past I’ve liked some and disliked many. Yet my judgment changed as I tasted the Petite Sirahs from Vina Robles by winemaker Matthias Gubler.

When Gubler produced the Vina Robles 2004 Petite Sirah Endpost, a reserve level wine, I thought I’ve finally found a Petite Sirah I love and highly recommended it. So I was thrilled when he recently opened a bottle of the Endpost so I could see how it had aged. What was a big, showy wine upon release wasn’t nearly as impressive at this stage. It wasn’t bad, still big and fruity, but it was tightly wound and not giving. Of course, a few more years aging and it could still come around.

The Swiss-born winemaker then honestly informed me: “This was not my usual style in making Petite Sirah. We used 100 percent new oak (barrels), which we no longer do, and it was an experiment at the time. My style is more drinkable, the typical Vina Robles style.”

Indeed, we tasted the 2003 Petite Sirah estate wine and it was much more impressive. It offered an array of tasty fruit flavors with loads of spice and juicy acidity and it was still very well balanced. I preferred it to the reserve I’d raved so much about, and it was more food friendly. His 2007 Petite Sirah from Jardine Ranch was also impressive. Spicy and complex with red and black fruit flavors with the full-bodied, briary characters one expects from this variety, it’s a quaffable wine that’s also food friendly.

During our tasting at Vina Robles I was introduced to another young winemaker, Aaron Jackson, whose eponymous brand “Aaron” is devoted to Petite Sirah. His mantra made me laugh—“Go big or go home”—and it’s the style of Petite Sirah he prefers. But his 2006 was impressive with its big blackberry and plum flavors highlighted with briary notes of spice, leather, and meat, quite well balanced and drinkable on its own. Jackson explained: “I use toasted barrels for more mid-palate structure. My wine has darker chocolate and coffee flavors, which are opposite of Matthias.” Jackson, who began making his brand in 2002, says he likes extended barrel aging, as he says it’s done in Napa. “I like to push barrel age closer to 50 percent new oak, and usually bottle in August,” he said.

Both winemakers stress the importance of the right vineyards, while keeping crop yields down and harvesting in September to avoid overripe grapes. Vina Robles planted Petite Sirah in 1997 to enhance blends, but seeing its potential in 1999 they began producing it as a single varietal. “I get good consistency from year to year,” Gubler concluded.