It's been six months since vehicles were allowed in the Oceano Dunes State Vehicular Recreation Area (SVRA), and some community members want it to stay that way—at least until the COVID-19 pandemic is under control. 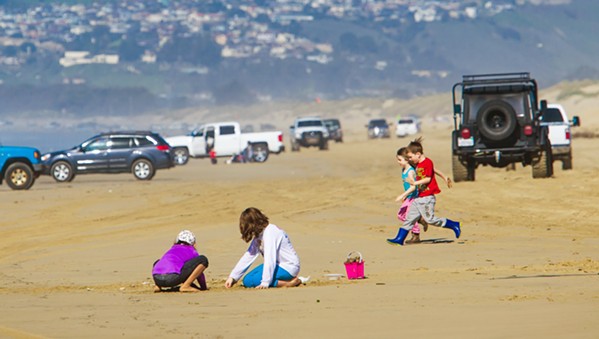 Hundreds have signed a petition aimed at keeping the Oceano Dunes closed to vehicles for the duration of the pandemic or until cases in SLO County and surrounding areas fall within "acceptable levels in accordance with the state's criteria." As of Sept. 22, more than 1,200 people had signed the petition, which was addressed to SLO County Public Health Officer Dr. Penny Borenstein and State Parks and was released online in mid-September by the Dunes Alliance, a coalition of organizations aimed at keeping the Guadalupe-Nipomo Dunes complex environmentally sustainable.

"Protecting our public health must be the priority," the petition reads. "Therefore, we call upon our local public health officer, Dr. Penny Borenstein, and the director of California State Parks, Armando Quintero, to help prevent the spread of coronavirus by keeping the Oceano Dunes State Vehicular Recreation Area closed to vehicles. Doing so will avoid dangerous visitation surges in San Luis Obispo County from areas with higher rates of COVID-19."

The Oceano Dunes SVRA has been closed to vehicles since March 26, when State Parks closed the park in an effort to prevent the spread of COVID-19. Despite budding reopening plans in the summer, State Parks agreed to keep the Oceano Dunes closed to vehicles through Oct. 1 in a consensual cease and desist order with the California Coastal Commission.

In the order, which was finalized on July 7, State Parks agreed to halt a number of development activities that the commission claimed were unpermitted and possibly harmful to snowy plovers. Without vehicles in the area throughout the spring, snowy plovers built nests outside their "seasonal exclosures"—designated breeding areas that are off limits to vehicles and visitors—and State Parks had attempted to prevent plovers from nesting in those areas in preparation for reopening.

The closure has offered some community members a chance to see what the dunes would look like without the thousands of buggies, four-wheelers, and dirt bikes that roll through each year.

"The public has been enjoying the beach," Oceano resident Enrique Diaz told New Times. "No traffic. It's quiet. No alarms going back and forth with the ambulances and the fires."

Diaz said he's lived in Oceano for about 40 years. He lives right next to the Oceano Dunes, but because of the traffic, he said he usually goes elsewhere if he wants to enjoy a nice quiet walk or just sit and enjoy nature. Now, he said, he can enjoy his neighborhood beach without seeing piles of trash or worrying about getting "run over."

Still, Diaz doesn't think vehicles should be entirely banned at the dunes. He'd just like to see SLO County build a different entrance, so that the portion of the beach closest to Pismo Beach could be opened for strictly non-vehicular activities. That would allow for the best of both worlds, he said, but such a change is not likely to happen before the fast approaching Oct. 1 deadline.

"We don't know what's going to happen now," he said.

Many don't see it that way. SLO County residents like Lea Rigo-Hensley, president of Freedom Ropes, want the dunes opened to vehicles as soon as possible, for both a much-needed boost to the local economy and the outdoor recreation it would provide at a time when many are wary of spending too much time indoors.

On Sept. 22, Rigo-Hensley launched her own online petition calling on State Parks to reopen the SVRA to vehicles as soon as possible. Spending time camping and riding outdoors in your social bubble is one of the few low-risk ways to get out right now, Rigo-Hensley told New Times. A lot of tourists come to the coast for the Oceano Dunes, she said, but she said tourists are already here, especially in Pismo Beach.

A lot of people seem to agree. Within 24 hours, Rigo-Hensley's petition accumulated more than 2,200 signatures.

"I think the dunes should be 100 percent open," Rigo-Hensley said, "and should have been months ago."

State Parks and SLO County Public Health both confirmed that reopening plans for the Oceano Dunes SVRA are in the works, but neither gave a specific reopening date.

"The county Public Health Department has worked with state officials on plans to restore coastal access and allow limited vehicle use on Pismo State Beach and Oceano Dunes State Vehicular Recreation Area, following a previous closure to vehicle traffic due to the COVID-19 pandemic," said Michelle Shoresman, a spokesperson for Public Health. "Vehicle limits may be temporarily reduced and would allow vehicles on the beach for day use only, with no car camping or off-highway vehicle recreation on the dunes." Δ