Check out the protesters who rallied against the Phillips 66 rail project.

They packed the county building in downtown SLO, filled the overflow room at the Fremont Theater, and even crowded the plaza in front of the county courthouse across the street. They were the hundreds of individuals who flooded into a SLO County Planning Commission hearing on the Phillips 66 oil company’s proposed rail extension project.

The project, which would allow the company to transport crude oil by train to its Santa Maria Refinery on the Nipomo Mesa, is a controversial proposal that drew a firestorm of criticism and opposition from local residents.

Davis was one of an estimated 390 people who signed up to publicly comment on the project before the commission during its two-day hearing. 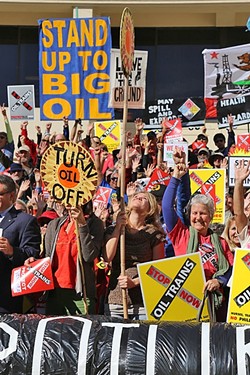 In late January, SLO County Planning Department staff recommended that the commission deny the project. In a lengthy report, staff asserted that approval of the project would create significant impacts on air quality, the environment, and public safety. The vast majority of those who participated in the public comment on the project asked the commissioners to side with county staff’s recommendation for denial. Commenters included not only residents and officials from cities in SLO County, but also individuals and representatives from Berkeley, Los Angeles, Oxnard, and Santa Barbara.

Phillips 66 sought to make a last-minute change to the project, suggesting they reduce the number of oil trains coming in from five a week to three, should the project be approved.

“That is now our proposed project,” Jocelyn Thompson, an attorney for Phillips 66, told the commission.

Heidi Harmon, a SLO County resident and activist who spoke at a large protest rally against the project on the first day of the hearing, said the company’s new offer wasn’t surprising.

“I think when your dealing with the fossil fuel industry, you’re always anticipating some kind of move,” Harmon said.

The commission did not make decision on the project. The hearing was continued to Feb. 25. The final decision can be appealed to the SLO County Board of Supervisors, and may eventually end up in court.

Harmon said she hoped the energy of the opposition to the project would carry over as it worked its way through what could be a lengthy bureaucratic process.

“Obviously the enthusiasm and willingness to spend the time and energy is here,” she said. “Are we going to see this level of energy at the supervisors meeting? I think so, but we’ll have to wait and see.”