While the majority of the SLO County Planning Commission favors moving forward with plans to approve a modified version of the proposed Phillips 66 rail spur project, the move is unlikely to deter the project's most vocal critics. 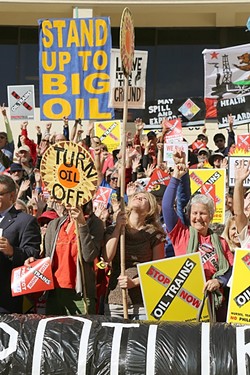 After a May 16 vote to outright deny the project, which would allow the company to bring oil to its Santa Maria refinery by train, failed 3-2, the commissioners indicated they would move forward with considering a reduced version of the plan, which would decrease the number of trains coming in to the refinery to three per week, down from the five initially proposed in the project.

Phillips 66 officials initially proposed the modified project in February, as public hearings for the project began. At the May 16 hearing, Commissioner Jim Irving, considered the swing vote on the controversial project, suggested that accepting the reduced number of trains and adding other restrictions to the project would mitigate some of the safety and environmental concerns identified by county staff.

"With the appropriate conditions of approval, this can be a benefit," Irving said.

That view isn't likely to appease opponents of the project, who have raised concerns about the trains causing additional pollution and the possibility of dangerous derailments causing explosions.

"I think they were trying to thread the needle," said Laurance Shinderman, a member of the Mesa Refinery Watch Group, an organization that opposes the project. "They bought into Phillips' shell game. ... We were disappointed."

Shinderman said that a reduction in the number of trains won't alleviate many of the environmental impacts and will do nothing to make the California cities along the rail line any safer from a potential derailment or explosion.

"They pretty much thumbed their nose at the communities along the coastal corridor," he said.

Feelings ran high at the hearing, with members of the audience booing commissioners who expressed their support of the project, and cheering those who did not.

Heidi Harmon, a local activist and opponent of the project, said that the commissioners' actions at the meeting may have been disheartening but would also serve to further galvanize those who oppose it.

"I think they were disappointed and disgusted, but not discouraged," Harmon said.

Whatever the commission's final decision is, it can still be appealed to the SLO County Board of Supervisors, the California Coastal Commission, and eventually the court system. The project will come back before the Planning Commission Sept. 22, and will include reopening public comment.