A professor of history finds himself in deep literary waters

I’m not going to start off an analysis of Dive Deeper by referencing the three famous words that launched Moby-Dick. I could. They are just three words, after all, two of them a single syllable. But I’m not going to. You probably already know those words, and anyway, a number of early 20th century readers never experienced that fateful moment in which Ishmael introduces himself and the adventure begins. 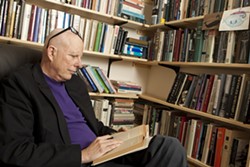 I learned that last fact from George Cotkin, author of the freshly released Dive Deeper: Journeys with Moby-Dick. The Cal Poly history professor—yes, he strayed, slightly, from more traditional history projects—reveals in his rather unconventional book charting the cultural resonance of another unconventional book, that Moby-Dick has seen many incarnations. Bloodthirsty editors have hacked out passages they deemed blasphemous, cleaved the book in half by removing Herman Melville’s many passages of metaphysical ramblings, and removed entirely the epilogue revealing that Ishmael alone survived to tell his lengthy tale. One version printed only the words and punctuation marks removed by another edition, making for a confused scramble e.e. cummings might have appreciated.

Of course, it’s difficult to blame these editors for taking liberties with a text that totals 135 chapters plus an etymology, extracts, and an epilogue. Still, Cotkin favors a gentler, more creative approach to the great literary whale.

“It started precisely in the summer of 2008,” Cotkin revealed.

He was going on an Alaskan cruise with his wife and in-laws and couldn’t think of a better companion text than Moby-Dick. While ambling through the Gulf of Alaska, surrounded by whales, Cotkin decided he wanted to spend more time with the book, perhaps even use it as a launching pad for his own literary masterpiece.

“The problem, of course, was that there’s a mountain or deep sea of literature about it. What could I say? I’m not a literary scholar. I’m a newcomer. I’m something of a dilettante. … I thought about the tremendous waves Moby-Dick had made in American culture,” explained Cotkin, who’s in the habit of revisiting the book every few years.

To most people, reading the mammoth text in its entirety every couple of years is no small endeavor. But, as Cotkin highlights in his book, there are a number of Moby-Dick scholars who have dedicated their lives to the book with a fanatical devotion that Captain Ahab himself would have respected. Still, it’s refreshing to read an academic perspective that equally recognizes more serious scholarly work and an Emoji—a Japanese emoticon language, of sorts—interpretation of the classic (for sale at emojidick.com, in case you’re curious).

So, after taking a more conventional approach to the effort, and admitting that the manuscript in question lacked passion, Cotkin scrapped a couple hundred pages—he would later repurpose bits of flotsam from the wreckage—and opted for another vein. Cotkin would match the leviathan chapter for chapter, drawing his inspiration from a word, phrase, or image evoked by Melville’s text from that chapter. After supplying readers with a page-long etymology of Moby-Dick, Cotkin treats them to “extracts,” mostly quotes from Melville and his critics. Admittedly, these morsels of praise and bewildered barbs are my favorite part of the book:

William Faulkner, in 1927, admitted what most writers feel about great works: “I wish I had written [it].”

“Who would have looked for philosophy in whales, or for poetry in blubber?” wondered London John Bull on Oct. 25, 1851.

“Who is this madman?” asked New York Commercial Advertiser on Nov. 28 of the same year.

Melville himself said, “[A] strange sort of book, tho,’ I fear; blubber is blubber you know, tho’ you may get oil out of it.”

And, amid allegations of blasphemy and godlessness, he said, “I have written a wicked book, and feel spotless as a lamb.”

It’s tempting to print the whole batch of quotes, just out of sheer delight at the language and wit employed by authors and critics of yesteryear. But for that, you’ll have to buy the book at amazon.com.

In his effort to “dive deeper”—a phrase employed so often in the book it ceases to be a double entendre and instead reads as a kind of battle cry—Cotkin also walks his reader through the half-dozen or so film interpretations, converses with Camus, even wanders through an episode of Star Trek. There’s no shortage of material: plays, paintings, songs, books, poets, rappers, all inspired by a book that celebrated its sesquicentennial birthday more than a decade ago. Of course, not all of these efforts can achieve the quality of their source text.

“I don’t think he succeeded all that well,” Cotkin said of Gregory Peck’s turn as Captain Ahab in a 1956 version of the film. And of another book inspired by the general story, Cotkin danced around any criticism by saying, “I can’t say that I read it all that carefully.”

Of course, Melville himself, despite being a literary deity, doesn’t present the best of examples to would-be writers. He has characters that make a brief appearance and then disappear, without explanation, never to be seen or heard from again. But fans, including Cotkin, tend to recognize these problems and move on.

“I suppose, like most of us, another draft wouldn’t have hurt,” Cotkin allowed. “He wrote it in a fury and he wasn’t known for editing, and that’s the way it is. There are problems. I’ll accept those.”

Of course, the richness of the text, its statements about race, the questions it poses about homosexuality—in terms of Ishmael’s relationship to Queequeg, or even Melville’s own yearnings—tend to trump such lesser details as characters who remain unaccounted for. And Cotkin dives deeply into these waters indeed, positing that there’s nothing in the text that insists on Ishmael’s whiteness, nor Ahab’s for that matter. And for a novel written at a time when slavery was the hottest of topics, that’s a statement in and of itself.

But perhaps the most compelling of these big picture themes is Melville’s quarrel with “God.” Despite some religious ambiguity, Cotkin writes, “Melville had not written an atheistic tract (that would have been the easy way out).” Not easy in terms of his ability to sell and defend the novel in mid-19th century New England. But certainly simpler than, say, taking on a deity with the same vehemence with which Ahab pursues Moby-Dick.

“To be an atheist or a believer is by definition to rest comfortably,” Cotkin argued. “But to believe, yeah, there is a god, and I’ve got a problem with him, well that strikes me as a heroic stance. What an opponent to take on, wrestling with God.”

And Cotkin might be a better authority than most in terms of sizing up an opponent. By embracing Moby-Dick as a subject, Cotkin isn’t necessarily looking to compete with the text, but he is cozying up to a novel that many authors take great pains to avoid out of fear of unflattering comparison. It’s a bold stride that can only be made by an author with enough humility to believe there’s space enough for us all in this turbulent sea of authors and their beloved books, grappling to survive.

For Cotkin, at least, the great texts are buoys, springboards, sirens that lure us to accomplish our literary best, if not outright literary greatness.

“This is the challenge, to be as great as Moby-Dick, as Melville,” he said. “The assumption is that exemplar brings out the best in us. I think that’s what Moby-Dick does for us.”