Phonetography: The Central Coast Photo Society's "Going Mobile" at SLOMA moves photography out of the pocket and onto the gallery wall

From Instagram to Tumblr, selfies to sexting, we all know that the revolution won’t be televised—it’ll be shot on a smart phone and streamed live. Answering this relatively new but already inexorable trend in image making is “Going Mobile,” the San Luis Obispo Museum of Art’s second exhibit of mobile phone photography. “This year elicited a strong showing of fine images across the board—abstracts, landscapes, portraits, panoramics, and photojournalistic style images,” says juror Steve E. Miller in his written statement. He introduces the show at its April 4 opening with a characteristic mix of passion and dry wit, and a flat affect that fails to conceal his expertise.

Although clearly cognizant of the intellectual process behind his selection, Miller notes that picking the winning images came down to “how the image makes me feel—a sense of wonderment, a sense of wanting to know more about where and how it was made, a sense of intrigue, a sense of beauty and fascination.” The result is a group of photographs including both landscapes and figural pieces, with a striking coincidental focus on water. That should probably come as no surprise in a coastal area, but this aquatic artistry extends beyond the ocean.

James Crawford’s Vortex, which took best in show, is an oceanic whirlpool evocative of the Homerian Charybdis. Cat Evans’ first place winner Raining Tulips plays with the reflective properties of water splashed on a lens, the drops themselves becoming tiny lenses. In second place is Noelle Luchino’s Klon Mass, a beautifully ethereal image of a cathedral lit for worship and the first dry entry among the winners. Third place returns to the water but adds an exultant figure with Andy Zink’s Holland, Lake Michigan. 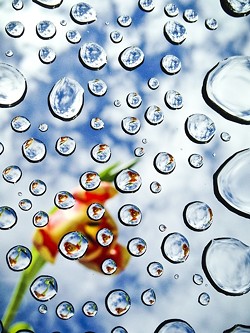 The uniform size of the photos equalizes participation, as does the accessibility of the device—smart phones aren’t universal yet, but they’re pretty widespread. And while I don’t advocate requiring a smart phone in order to view a gallery exhibit (as was the case at Cal Poly University Art Gallery’s “Digital Media Now”), calling for photographs taken on mobile devices increases the number of possible participants, rather than decreasing it.

At the opening, the crowd spends some time gazing politely at the prints hung on the walls, but the majority of their attention is focused on a slideshow of all the entries at the end of the gallery, further equalizing participation in the show. “That has to be the most photographed underside of a pier—anywhere,” says one attendee, but by the time I turn around to identify the pier in question, the revolving series of images has already moved on.

The great satisfaction of catching one of the 36 entries selected by Miller as it flashes across the screen is undeniable, but simply getting to see—and perhaps judge—all the entries for ourselves is both empowering and diverting, in both senses. We’ve been so acculturated to constant streams of images that this seems like the most natural way to take in the show; we have to force ourselves to turn away from it in order to give the selected prints the attention they merit.

Viewers did spend enough time with the printed selections, however, to make a people’s choice selection—Colorado Winter, shot by second-place winner Noelle Luchino. Maybe it’s just the heady confidence of an audience whose January temperatures creep up into the 80s, but this fairytale shot of evergreens in the snow impressed upon its viewers how wide-ranging an exhibit of mobile phone photography can truly be. It was just a passing moment. ∆