When most people think of the beach, it’s usually a picturesque tableau: the sun, the surf, the annoying caws of seagulls trolling for food, and the ever-present sand that's almost magnetically attracted to you and all your possessions.

But photographer Josie Iselin is interested in only one thing: seaweed. Yes, that’s right. Seaweed—the greenish-brown mush that washes up on the shore, attracts a multitude of annoying gnats, and smells like an old fart.

Iselin, however, doesn’t look at seaweed as disgusting or as an unmitigated nuisance. Instead, she collects the material and uses it to create vibrant portraits of a plant that doesn’t get much attention.

Iselin has a BA in visual and environmental studies from Harvard College as well as an MFA from San Francisco State University, the city where she currently lives. Her latest exhibit, Intertidal Heroes, will be on display at the San Luis Obispo Museum of Art.

In addition to her photographs, her book, An Ocean Garden: The Secret Life of Seaweed, will be shown as well. Iselin said that the book gives her the opportunity to write lyrically about what she calls the science of seaweed.

The artist got her start as a seaweed photographer when she began taking workshops at the University of California’s herbarium in Berkeley. For four days, she spent her time exploring the various coastal zones, collecting seaweed to study from. According to Iselin, that’s when she found “the wow factor.”

“I had my ‘aha’ moment in 2010 when I was at the Duxbury Reef, which is north of San Francisco,” Iselin said. “I held up a piece of seaweed, and I was just blown away by the form and color. There’s this intensity of color and fabulousness of form, and there’s so many varieties of seaweed that it’s just mindboggling.” 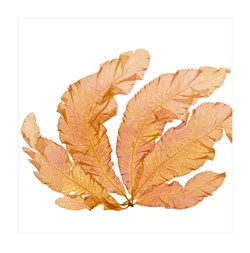 Instead of just snapping a few photos with a traditional camera, Iselin takes frequent walks on the beach, picking up whatever seaweed gets washed up with the tide. She then takes them back to her studio, sometimes drying out the specimens, other times leaving them wet, and takes photos of them with a flatbed scanner.

“Seaweed doesn’t photograph very well,” Iselin said. “It’s hard to get the light to come through if you’re setting it on a rock and then just taking a picture. There are better ways to look at seaweed. With the scanner, you can really get a sense of the transparency and different ways the light hits it.”

The result of Iselin’s unique process is a series of images depicting various forms and shapes of seaweed, each with a surprising array of ethereal colors. One of her photos in particular, Delesseria sanguinea, portrays a piece of seaweed with shockingly bright hues of orange, yellow, and pink. The colors are so vibrant, the photograph almost looks as though it’s been painted or drawn.

The photo Halosaccion and Nereo features three different types of seaweed, all of the same rubbery texture and green shades. The image on the far left focuses on spindly leaves, with the light from the scanner giving them the appearance of tissue paper, while the middle photograph shows specimen that look more like the flowers seen floating in the underwater sky in Spongebob Squarepants rather than aquatic algae plants.

What’s really unique about Iselin’s images is that she’s found a way to mix science with art and offer people a new perspective on ocean flora that is usually overlooked.

“These are plants that haven’t been seen,” Iselin said. “People have no sense of how beautiful they are. I like that these photos are revealing something that is hidden.”

Intern Adriana Catanzarite lives in a pineapple under the sea. Send her Krabby Patties via Arts Editor Jessica Peña at jpena@newtimesslo.com.