Phyllis Madonna is one classy dame. Sure, she presides over the greatest motel in the freakin’ universe. Sure, she was married to the iconic Alex Madonna, a dude who did things his way or no way at all. Sure, her Inn has a pink tennis and basketball court and spa … not to mention more carved cherubs and chandeliers and giant boulders than you can shake a stick at, but at heart she’s still a down-to-earth philanthropist who every year organizes a fundraiser for the SLO Women’s Shelter. Sorry, but you gotta dig Phyllis!

This Friday and Saturday, March 7 and 8, check out Phyllis Madonna’s Musical Revue and 27th Annual Fashion Show with both a lunch ($75 ramp seats or $65 general admission) and dinner ($130 ramp seats and $120 general admission) show. For tickets, call 784-2441 or email cheri@madonnainn.com.

“Join us at the Alex Madonna Expo Center for a lively variety show and the latest fashions from My Favorite Things Boutique. Enjoy a delicious Madonna Inn meal and bid on a wide variety of Silent Auction items. Both dinner shows also include a live auction, wine tasting, music, and dancing after the shows. Have a great time with friends while supporting services for victims of intimate partner violence and child abuse,” according to the Madonna Inn.

For those who don’t know, The Women’s Shelter Program of San Luis Obispo “is committed to recognizing and responding to our community’s need for comprehensive multicultural domestic violence and child abuse services. We understand that domestic violence and child abuse, in their fullest scope, impact primary victims, family members, society, and future generations. With this in mind, it is our goal to stop the cycle of violence by providing crisis intervention, emergency shelter, advocacy, treatment, prevention, and education,” according to the organization (womensshelterslo.org).

Keep up the good work, Phyllis! New Times salutes you! 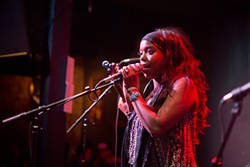 One of my very favorite local bands is The Monroe. They’re soul-drenched, with an amazing singer in Morgan Monroe backed by great musicians, especially the enigmatic keyboardist and horn player Isapony XD. They have so much talent! Sadly, I’ve never seen a more pathetic inability to create and design a marketing campaign. Because of that, they seem disorganized and unprofessional. I mean, they don’t even have a decent press photo! Their bio is pretty much a joke. Website? Anything? Hello? Plus, a quick search of the Internet shows a handful of other bands named The Monroe. How’s that going to work out later?

Look, I know they pour their hearts and souls into their music, and it shows! And I know a lot of artists don’t know how to market themselves, but surely they must know someone out there who can take a decent band photo and help them write an interesting and intriguing band story, right?

The reason I’m taking them to task right now is because Thursday, March 6, they have their first headlining gig at SLO Brew (7:30 p.m.; 21-and-older; $10 presale or $12 at the door). The great Forrest Day is opening for them! So is Horatio! The Monroe is also releasing their new EP, of which I requested a copy so I could write about it before their show. Did I receive a review copy? I’ll give you one guess.

This is a band that won Best R&B Song as well as Best Live Performance at the 2013 New Time Music Awards. They have a future! They’re going places! So get your shit together, The Monroe! Now!

On Saturday, March 8, witness the glory and the power than is High Voltage—A Tribute to AC/DC (7:30 p.m.; 21-and-older; $10). This is a terrific local act that takes their tribute show throughout the West Coast to rave reviews. You’ll hear all the hits, and they sound amazeballz! 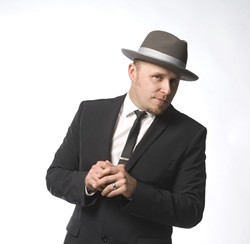 The SLO Vets Hall will be jumping this Saturday, March 8, when the SLO Blues Society presents up-and-coming bluesman John Németh with his icon mentor Junior Watson at 8 p.m. ($20 at the door; 21- and older). Big Daddy’s Blues Band will open the show.

Singer, harmonica player, and songwriter John Németh is just beginning to cement his place in blues lore. The rising star has an emotive voice and stellar harp skills, and he effortlessly blends retro-modern blues and soul music.

“Blowing like Little Walter and singing in styles that range from the pathos of a young Jimmy Reed to the suppleness of Nat King Cole, he channels the greats with a verve that’s imagination, not imitation,” gushed The Dallas Morning News.

The Boise native grew up singing in a Catholic church and local bands. “By 2002, he was touring with Junior Watson and was selected as the crowd favorite at the Portland Waterfront Blues Festival. In 2005 and 2006, he toured with Anson Funderburgh and the Rockets. His first solo CD, Magic Touch (Blind Pig, 2007), won a Blues Blast Award for ‘Best New Artist Debut.’ His 2009 CD Love Me Tonight received a Living Blues Award for ‘Most Outstanding Blues Singer’; and his 2010 CD Name the Day! received a Blues Music Award nomination for ‘Best Contemporary Blues Album,’” according to his press materials.

Junior Watson, on the other hand, has nearly 20 years of experience. He was a founding member of The Mighty Flyers and stayed with the band for 10 years. He then left to join Canned Heat for 10 years. He’s backed up and recorded with the greats: Big Mama Thornton, Lynwood Slim, Jimmy Rogers, Luther Tucker, Charlie Musselwhite, Kim Wilson, and William Clark.

This ought to be a barnburner of a show.

At noon on Friday, March 7, grab your lunch and head to the SLO First Presbyterian Church to enjoy a free Brown Bag Concert with Songwriters at Play host Steve Key and friends. Rumor has it that the great Nashville songwriter and raconteur Phil Lee, who recently relocated to the Central Coast, will make an appearance. Doors open at 11:45 a.m. in Wilson Hall, on the corner of Marsh and Morro Streets. Fair Trade coffee and chocolate are available for purchase. Call 543-5451 for more info.

Cuesta College has a couple of great jazz events this weekend in their performing arts center starting this Friday, March 7, with Gordon Goodwin’s Big Phat Band: “One of the greatest jazz bands in the world! You’ll be thrilled with their performance!” said concert organizers. The show starts at 7:30 p.m. Then on Saturday, March 8, also at 7:30 p.m., check out The 31st Annual Cuesta Jazz Ensemble Festival Concert featuring The Cuesta Jazz Ensemble and The Cuesta Jazz Orchestra (formerly the Monday Night Band). Ron McCarley and Warren Balfour direct the ensembles. Order and print your tickets online at cpactickets.cuesta.edu. Parking is free in Lot 2 for all events.

Swedish folk group Väsen plays the Red Barn Community Music Series this Friday, March 8 (5 p.m.; all ages; $20). “The musicians of Swedish folk super group Väsen take the traditional music of their native Sweden and blend it into a delicious mixture of distinctive rhythms, gorgeous melodies, and unstoppable grooves,” according to their press materials. “Combining jazz, classical, dance, and folk elements, Väsen manages at once to be delicate and intensely energetic. Väsen’s music is a uniquely beautiful combination of the traditional sounds of the viola and nyckelharpa (a keyed fiddle unique to Sweden), and the more modern sounds of alternatively tuned 12-string guitar.”

By popular demand, Unfinished Business presents another “all Beatles” concert in celebration of the 50th anniversary of The Beatles’ first U.S. performance on the Ed Sullivan Show in 1964. “Our last ‘all Beatles’ show Feb. 8th at Mongo’s Saloon in Grover Beach drew a sold out crowd of almost 400. This time, we take the show over the grade to D’Anbino’s Tasting Room,” said Ed Miller. See them this Saturday, March 8, at 7:30 p.m. ($15; call 227-6800 for reservations).

The SLO County Jazz Fed proudly presents its annual Young Jazz Scholarship Concert on Sunday, March 9, at 4 p.m. in the Steynberg Gallery. The concert showcases three of the finest young local jazz musicians—Vito DiNovi (guitar) from Cal Poly; Sean Collins (drums) and Katie Hilt (vocals) both from Cuesta. An excellent rhythm section’ll back them. The show’s free (although donations are welcomed at the door). The Matt Taylor Memorial Scholarship Trust sponsors it. For more info, call 546-3733.

It’s been awhile since Tony Furtado rolled through SLO County, but he’s coming this Sunday, March 9, to Shell Café from 6 to 8 p.m. ($10; shellcafepismo.com). “I’m in between albums and labels right now,” said Furtado, “but I’m gearing up to hit the studio again up here in Portland, where I live. My newest CD/DVD was released last year, Live at Mississippi Studios—probably my favorite of the 16 albums I’ve released during my career. I also just released an album of solo acoustic tracks for the label Blue Coast Records, an album released in super hi-res DSD (digital release only). I just finished work on the soundtrack to an indie documentary called Wrestling With Iowa by Tim Jackson.” Don’t miss this great Americana/roots/folk musician, slide guitarist, and 5-string banjo master (he’s a two-time national champ!). If you’re a fan of Ry Cooder’s musicianship and Paul Simon’s voice and music sensibilities, Furtado’s the guy to see!

Holy smokes! If you want to see West Side Story on Monday, March 10 (7:30 p.m.), at the PAC, you better call for tickets right now (756-4849; $58 to $88). As of last Tuesday, the only seats left were in the dress circle, balcony, and gallery (center and left)—we’re talking the nosebleed section, you’re up so high! Still, every seat in the PAC is pretty good, and who doesn’t want to witness the Sharks and the Jets facing off in a rumble or hear the score’s great songs such as “Something’s Coming,” “Tonight,” “America,” “I Feel Pretty,” and “Somewhere?” Plus the romance! “When you’re a Jet you’re a Jet all the way from your first cigarette to your last dying day!” There’s a reason this is considered one of the greatest musicals of all time!