Pier into the history of Cayucos 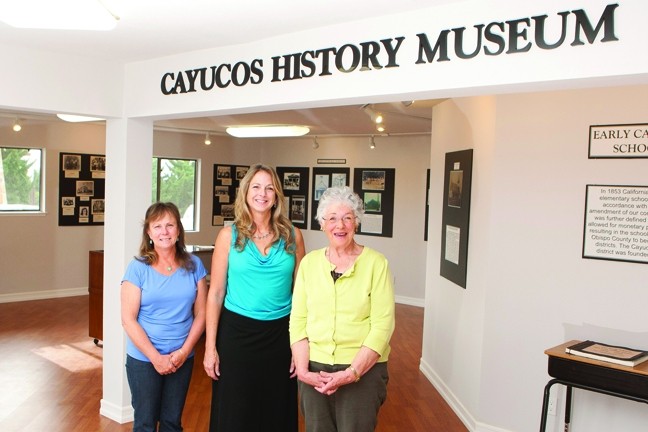 From Hearst Castle down to the set of Cecil B. DeMille’s The Ten Commandments in the Guadalupe-Nipomo Dunes, there’s no question that San Luis Obispo County is a treasure trove of centuries of history. On Friday, Jan. 17, even more of the county’s history will be uncovered to the public with the grand opening of the Cayucos Visitors Center and Historical Museum. The museum is the brainchild of several Cayucan historians and residents, including Lou Smith, Karry MacDonald, Elaine Thompson, Jan Lewis, and Shirley Lyon, the latter of whom is the center’s chairwoman. All five women are active members of the Cayucos community, with ties to both Friends of Cayucos Library and the Cayucos Chambers of Commerce.

“The long-awaited vision of a Cayucos History Museum is now a reality,” said Jan Lewis, a volunteer for the town’s historical society who previously produced the film The Monster of Cayucos as a tribute to The Monster of Piedras Blancas, a B-movie filmed in the town.

Spanning more than 10,000 years of local history from the town’s inhabitation by the Chumash tribe, who named it after their word for “canoe,” to the town’s founding in 1868 by ship captain and farmer James Cass, the Cayucos Historical Museum presents a fascinating and comprehensive scope of the area. The museum will feature educational panels, historical photos, interactive computer programming, and multiple projects on the town’s famous 900-foot pier, built by Cass with a Mexican land grant over the latter half of the 19th century. These will include a model of the pier constructed by students from Cayucos Elementary School. After all, along with its unrivaled beach and surf spots, Cayucos Pier is one of the town’s many tourist attractions, having established its former reputation as a port for shipping and the importation of lumber, and no doubt helping it to be listed as one of “America’s coolest small towns” by CNN’s travel expert Arthur Frommer in 2009. By devoting a significant chunk of the exhibits to this particular tourist attraction, the Cayucos Historical Museum will give residents and tourists alike a larger historical picture of Cayucos Pier, which, unlike nearly every other pier in California, still incorporates structural elements from its establishment nearly 150 years ago.

News of the Cayucos Historical Museum’s grand opening has created a local buzz from Cayucans, who were previously treated to a soft opening of the museum on Independence Day of last year. However, the building, which was rented by Lyon and the historical society in September 2012, was noticeably different during that point in time, and the museum’s exhibits were less extensive than they are now. As the museum is still a work in progress, future exhibits are being discussed by the historical society, with much thought given to recent history, in which a thriving town of what was once only 1,000 residents became one of the largest tourist attractions in San Luis Obispo County.

The grand opening of the Cayucos Historical Museum will be held from  5 to 7 p.m. at 41 S. Ocean Ave., the historical museum’s permanent home, which conveniently overlooks the pier. For more information, e-mail Jan Lewis at jlobispo@hotmail.com or call 704-7985.

Paws Cause is now accepting donations to help the organization meet its goal of spaying and neutering more than 100 North County cats on Spay Day, Feb. 23. According to Paws Cause, there are more than 15,000 abandoned and feral cats in the North County. For $25, you can sponsor a spay, and Paws Cause is also accepting cat food, towels, and blankets, and loans of traps, carriers, and kennels, as well as looking for volunteers. Send donations to PO Box 1505, Templeton, CA 93465, visit northcountypawscause.org, or call 226-8311.