What will be the fate of the Hartford Pier and the businesses that depend on it?

On March 4, in the cramped boardroom of the Port San Luis Harbor District, the district’s Harbor Commission voted to shut down passenger vehicle access on the Harford Pier in Avila Beach. With little input from businesses that will be impacted by the decision, the board of directors took one step in addressing a dilapidated canopy that’s been creating headaches for more than 20 years at the end of the pier.

But they’re calling it an emergency.

The worry? That, given a strong enough jolt, the canopy could collapse and kill or injure anyone in the wrong place at the wrong time. Port San Luis Harbor Manager Steve McGrath warned commissioners of a “sudden unexpected catastrophic failure.” 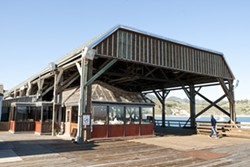 In March 2010, the district obtained an emergency permit from the California Coastal Commission to remove six support beams—or “bents”—from the rear section of the pier—farthest from the land. District officials then spun that emergency permit into a new engineer’s report detailing the extent of wear and tear on the end of the pier and, particularly, a large historic canopy that was first built in 1919.

But as far back as 1989—maybe even 1982, when early discussions began—district officials were eying dangerous conditions presented by the canopy, which was in need of repair, if not outright replacement. It covers both the Olde Port Inn restaurant and Olde Port Fisheries.

“We have a bar and part of a restaurant under a structure that is ready to fall in,” a member of the public said at the March 4 meeting this year. “And it was ready to fall in 20 years ago.”

Such a distinction might make one wonder what, exactly, the emergency is.

In fact, the district was ready to address issues with the canopy 20 years ago, but protests from business owners and historic-preservation junkies stalled any efforts. Instead, with some court-inspired persuasion, the district opted for a literal patch. Still, it seems the district’s goal has always been to altogether remove the canopy—which is quite possibly a financial black hole kept in place for its historic character and adoration from the community—or perhaps demolish it and replace it with a similar structure.

While district officials scramble to decide what to do with the canopy and how to do it, whatever it is, they’ve elected to shut down the pier to passenger vehicles. Though not unprecedented, allowing people to drive their cars onto an aging wooden pier is something of an anomaly in California. According to a report by Cannon engineering firm released Feb. 2, a big, horizontal jerk—like a car coming to an abrupt stop on the pier —could topple the canopy.

Among myriad listed structural problems, the company said all the collar beams on the canopy “have experienced some level of crushing” and some portions “are extremely rotted and crushed.”

The district has been repairing and replacing sections of the pier for several years in front of the canopy, but has yet to tackle that last section, which presents perhaps the trickiest project. Cannon found that vehicles weighing more than 7,000 pounds shouldn’t be allowed on the pier, and officials should enforce strict speed limits. Rather than enforce the exact weight and speed of vehicles, McGrath recommended barring traffic altogether.

On a 3-2 vote, the commission agreed. And with a checkmark on an additional coastal commission emergency permit, the district shut down vehicle access indefinitely on March 9.

Cannon further advised that some buildings on the pier be closed in wind speeds exceeding 35 miles per hour with 45 mph gusts. The recent tsunami, triggered by the quake in Japan, had no impact on the pier, McGrath said.

At its cheapest, the fix will run up a bill in the neighborhood of $150,000 to remove the six bents. The district has about $120,000 in reserves for the project, McGrath said, and while district officials weren’t unanimous in their decision, they don’t seem willing to entirely scrap the canopy. Replacing the canopy, which involves making repairs and upgrades to the pier below, could run between $400,000 and $600,000.

Whatever the decision, it’s sure to rile business owners. According to one owner, his business went down by one third the last time the pier was closed to traffic in the ’80s. And with Avila virtually shut down by landslides and repair work in recent months, it’s just another hit business operators on the pier might not be able to withstand.

According to Karin Argano, executive director of the Avila Business Association, the decision to block passenger vehicles came so quickly, members of that association don’t have a cohesive response yet.

B.J. Johnson, vice president of the B.J. Enterprises fish market, declined to comment in detail, noting only that “everyone’s going to be affected—how much remains to be seen.”

The Harbor Commission’s agenda itself may have kept business owners from showing up and learning about possible changes to the canopy. The agenda proposed a site tour and update on the pier’s condition—not any closure. Midway through the discussion on March 4, however, Leonard Cohen, owner of Olde Port Inn, walked into the meeting to make his voice heard—even before closing the pier to passenger traffic was an option.

“I’d like to see the restaurant protected,” he told commissioners, asking that they not put him and others out of business by acting rashly on a 20-year-old problem.

It seems like a fight is prime for a scheduled March 29 hearing, during which the commission will decide on two remaining options: Fix the pier and canopy without removing anything; or tear down the canopy, fix the pier, and put up a new canopy.

County Supervisor Adam Hill said he’d been in contact with business owners, engineers, and district officials, but noted the county has no jurisdiction; ultimately, it’s a harbor district matter.

Harbor Commission President Jim Blecha said “it’s a bit of a conundrum, but we’ll work our way through it.