Fed up with what they say is mismanagement by the Port San Luis Harbor District, Barry Cohen and his son Leonard, the owners of Hartford Pierâ€™s Old Port Inn and fish market and the recently closed fish processing business are asking a jury to award $4 million in damages. The Cohens claim that the district has breached a number of contracts by their failure to properly maintain the pier, provide adequate parking, and allow truck access. The Cohens attorney laid out their argument during opening statements May17. 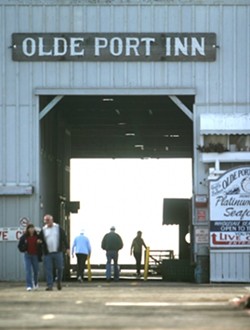 # In response, Marty Moroski, an attorney for the Harbor District, attacked the character of the Cohens. Moroski told jurors that evidence would show that the Cohens have changed their stories and repeatedly lied to the district. He added that the failure of the fish processing business was due not to breaches in contract, but to fishing regulations that have destroyed the industry.

In 1965, Barry Cohen, then 26, began operating a wholesale fish market at the end of Hartford Pier, with the goal of opening an adjacent restaurant. But at that time the pier, built in 1873, was in dire need of repair, with holes large enough for a man to fall through. Friends told Cohen that no one would go out there to eat. â€œOne man, Leo Brisco (at that time president of the Harbor District), felt differently,â€? says Cohen. â€œHe encouraged me and said that the district was going to repair the pier. He also told me that he too had a dream to build a harbor that lots of people could enjoy.â€? A few years later Barry opened the retail fish market, and Leonard worked his way up at the restaurant from dishwasher to manager. Eventually Barry Cohen sold the Old Port Inn to his son.

Trouble began to brew in the 1990s, when the district decided to remove the canopy that serves as a roof for the restaurant, claiming it was termite ridden and dangerous. Barry Cohen filed suit to save the canopy. The 1993 settlement that ended the suit made the district responsible for repairing the existing canopy, maintaining the pier, providing a minimum of 17 public parking places, and allowing trucks temporarily park in fire lanes. The Cohens claim the district never repaired the canopy or properly maintained the pier, and that the district is responsible for enforcing parking regulations on the pier.

In February 2004, parking enforcement came into question when an ambulance was called to tend to a restaurant patron suffering chest pains. The ambulance made it down to the end of the pier, but had difficulty leaving the pier due to a number of cars parked in the fire lane.

In May 2004, the California Department of Forestry, the agency responsible for emergency services on the pier, sent a letter to the district prohibiting parking in fire lanes. As a result, the district in June sent a memo to the Cohens that banned truck parking in the fire lanes. In October of that year Barry Cohen shut the doors on his 40-year-old fish processing business, and he and Leonard filed their claim against the district.

â€œThe district is required to maintain and repair all public areas of the pier,â€? says Bill Speir, an attorney for the Cohens. â€œA district memo states that two-thirds of the road is in dire need of repair, but instead of repairing the pier the district has decided to restrict access. You cannot have a wholesale fish-processing business without trucks.â€? The memo also states that the pier was not made for trucks and that the â€œCohens may need to change the way they do business.â€? In his opening statement Spier noted that in the late 1800s, trains rolled down to the end of the pier, where a number of fishing vessels unloaded their catch.

Attorneys for the district presented jurors with a large photo of numerous semi-trucks lined up along the pier. â€œThey ran a fish business that delivered all the way to Mexico,â€? Moroski said. â€œThe district did not expect the magnitude of the business at the time of the contract.â€?

Then in a statement that seemed to conflict with the Districtâ€™s claim that the Cohens flourishing fish-processing business was negatively impacting the pier, Moroski said that the Cohenâ€™s business folded as a result of the collapse of the commercial fishing business in the Western United States. â€œCohen is using the blame game to blame the district for the failing fishing industry,â€? Moroski said. â€œCohen denies the impact of national legislation on his business, though he has said that â€˜commercial bottom fishing used to be a full time job, now it is limited to a handful of days per month.â€™ There is a core issue over credibility. The Cohensâ€™ stories are inconsistent.â€?

The trial is expected to continue for four to six weeks. âˆ†

Karen Velie can be reached at kvelie@newtimesslo.com