A recent march took peace activists down a shamrock-lined corridor

It was St. Patrick's Day, and it was marked by colorful contrasts.

By 11 a.m., clusters of green-clad revelers had already formed around the bars on Higuera Street in San Luis Obispo. Some of the guys wearing goofy hats and shirts with messages like "You can't drink all day if you don't start in the morning" had obviously already hoisted a pint or three. They traveled on foot in groups of four or five or six, dodging casual strollers and tourists and sometimes darting across the street between gaps in the steady flow of traffic. 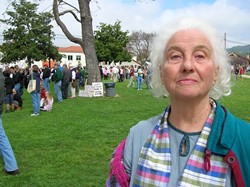 # A few blocks away, at and around Mitchell Park, was more of the same, except the predominant color was pink and the T-shirts were more likely to say "Jail to the chief" than some drinking-related catchphrase. SLO CodePINK, a women's activist group that coordinates rallies and other events, had joined with Blowin' in the Wind and other local peace groups to mark the fourth anniversary of the war in Iraq by presenting more than 3,000 prayer flags, each bearing the name of a U.S. soldier killed in Iraq.

In the streets between, the holiday beer-buzz murmur from downtown SLO's main thoroughfare blended with muffled echoes from an activist with a bullhorn. Girls adorned with glittery green shamrocks walked one way, cars with magnetic peace ribbons and "I support Cindy Sheehan" bumper stickers drove another.

At Mitchell Park, folding tables served as booths for various local activist groups. One stand featured pictures of soldiers under the heading "California's Daughters & Sons." Beside the photos was a message: "Stay gentle viewer/really see these faces/read their names/note their ages/and weep for what is lost."

Pat Miller, an 80-year-old woman with gleaming white hair, was wandering near the display, taking in the morning's activities with clear blue eyes.

"I'm amazed at the wonderful job they've done," she said, gesturing around at the crowds and fluttering flags.

Her compliment might carry more weight than that of a typical octogenarian. Miller explained how, as a founding member of Mothers for Peace, she's participated in hundreds of events over the years since the group started in 1969.

The Vietnam War prompted the proliferation of more than a few peace protests around the country, but Mothers for Peace along with a group known as the Abalone Alliance also eventually picked up the cause against Diablo Canyon Nuclear Power Plant.

These days, however, the first generation of activists is slowing down. Miller's husband couldn't make it to the Mitchell Park event, and even she was doubting whether she could walk the several blocks because of a back operation.

"I'm losing my memory," Miller said with some melancholy, though she went on to describe getting snapped at for leaning against a fence at the White House during a march and once being arrested along with a group of Abalone Alliance activists.

"That happens," Miller said, mentioning that she knows a few "dear dropouts" who just can't participate anymore, mostly because of age. 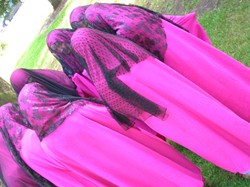 # Still, she does what she can.

She pointed out a few fellow silver-haired protesters who she knew by name, but enjoyed the presence of younger strangers, too.

"This man," she said, pointing to a nearby sunglasses-wearing figure resolutely holding a homemade sign, "we both believe in peace."

And so the torch is passed, but even this motion carries a challenge. These days, it's sometimes hard to sift a single message out of the multitudes. Participants at the March 17 event carried placards that read "St. Patrick chase out the war snakes" and "Iraq is Arabic for Vietnam." They also wore shirts that said "No Wal-Mart" and buttons emblazoned with "Vegetarian for Life."

While Miller strolled off, a woman began proclaiming instructions for the day's activities through a loudspeaker.

"Please do not respond to the hecklers," she said in anticipation of the shouts and honking horns. She also asked that any signs not related to the flags like "Impeach Bush" not be displayed.

The marchers began their slow walk away from the park and toward Higuera Street. With 3,210 flags, the crowd took quite a while to disperse. A group of younger activists in knit caps began pounding djembe drums. One woman walked the line with a counting device in her hand, clicking it as her eyes scanned the crowd, once for each face. The official CodePINK attendance tally was 848.

At the tail end of the procession, SLO CodePINK co-founder Dian Sousa helped hoist a sign that read "What Will You Do?"

She agreed with longtime activist Miller's assessment that burnouts can happen and messages can fade, but countered that such setbacks argued more for the importance of what they were doing.

She went on to explain that, as a national group, CodePINK tries to be creative in its protests so as to not grow stale but also commented on the timeless nature of the whole situation.

"War is not new," she said, "and the response to it's not going to be new either."

Ultimately, she believes that the actions of her group and others are making a difference. There were 10 people at the first meeting of the local CodePINK branch, she said. Now, about 30 or 35 people attend regularly, and she handles a contact list about 500 names strong.

Whether the message is fresh or lost amid the din of other causes, keeping it public is key, Sousa explained.

The marchers put that theory to the test as they streamed up and down Higuera Street. Outright confrontations were rare, considering that many of the passersby were most intent on getting to the bottom of their next Guinness. Still, counter-protesters made their opinions known. One twenty-something whistled "The Battle Hymn of the Republic" as he passed flag-bearers on his way into Downtown Brew. Another muttered, "The war isn't going anywhere." Yet another ducked underneath a row of flags, batting them aside and pausing long enough to point at a border collie spaniel with a "Puppies for Peace" sign on its collar and say, "You can't choose for your dog."

"Just ignore him," one protester stage-whispered to another.

At the end of the line, behind even the final CodePINK sign, a man marched with a sign that read "Support President Bush/Let's Roll/Support U.S. Military."

The efficacy of the marchers' approach and the impact of the day's events are by nature hard to measure, but probably best summed up by two scenes.

The first: Two young men pacing the sidewalk, not far from where a mass of bagpipers soon erupted seemingly from out of nowhere near Garden Street, conversed about another protest they'd heard about recently, one that apparently shut down the Golden Gate Bridge. It was, as one of them said, "some fuckin' tree-hugger thing."

The second: A small group of people huddled around a microphone back at Mitchell Park, belting out John Lennon's "Give Peace a Chance" while older marchers sat and kids spun and whirled on the grass.

"Welcome to our time warp," a gray-bearded man said from under a black cap with a bright-pink button.

He swayed and shuffled to the music some more before shrugging slightly.

"I never thought we'd have to do this again," he said, mostly to anyone who'd listen. "I really thought we'd won."

The singers gave way to a spoken-word poem rant by a member of the Empower Poly Coalition, who in turn made way for the arrival of nine women in pink burqas who keened and wailed to mourn the violence and death in Iraq.

Their ululations echoed across the park and were swallowed up by everyday street sounds punctuated by hoots, hollers, and near-drunken shouts just a block or two away. ?