It’s Saturday, Jan. 16, and Karla Mi Lugo and her percussionist Rakka Down, who call their duo Pink Faucet, are already performing when I walk in at 8 p.m.

Karla is telling the crowd about how she was once hired to be a French singer.

“Though I’ve never been to France until recently, I told them I could sing in French. I mean, even though I don’t speak the language don’t mean I don’t got the vibe. It was a good gig in the street, and most people weren’t really paying attention,” explains Karla, and then she plays her accordion and launches into her faux French singing.

“S’il vous plait. Je voudrais. Un café. Un toilet,” she sings in her best Edith Piaf singsong voice. As far as my high school French tells me, she just sang, “If you please. I would like to. A café. A toilet.” To her credit, it definitely has a French vibe!

After the song, she explains that if she were president, “every city everywhere would have snack tables,” and then she asks if there’s anyone here who’s under 13 or offended by swear words. One woman in the audience says, “a little bit,” so for her next song Karla says, “Maybe I can bleep them out, do the radio edit,” and then she explains she’s going to sing rap lyrics over the tune to “La Vie en Rose.”

Soon she’s singing “I ain’t fluffin’ wit’chu,” and then a guy in the audience joins in on the chorus, because there’s something about Karla that invites audience participation, maybe because her performance is so intimate and conversational.

Meanwhile, her percussionist Rakka Down, who has a cymbal tied to her head and a little drawn-on mustache that makes her look a bit like Don Quixote, keeps the rhythm on a little snare drum, occasionally taking a mallet to her cymbal hat. “Gong!”

It’s weirdly wonderful, and then Karla is explaining that she had a hard time learning to read in the Georgia public school system, but that she’s since become quite adept at it, and she asks the audience for a book, and someone sends up Terry McMillian’s novel How Stella Got Her Groove Back from Linnaea’s small library, and Karla requests a page number—“37!” someone calls out—and then she turns to page 37 and starts singing the text, and I suddenly realize that Karla would make a great kindergarten teacher except for the “ain’t fluffin’ wit’chu” stuff.

“I can improvise-sing books,” Karla says with a smile. “They don’t teach that in public schools.” 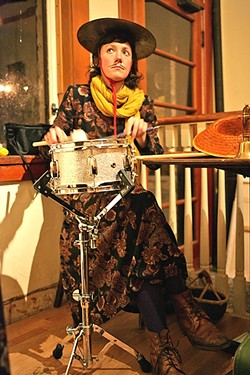 More stories follow, one about a group of atheists and a Russian family Christian band, another about a tree representing author Henry Miller’s manhood, and then she sings “Amazing Grace” like a Russian Gypsy song. Then we’re onto Karla’s specialty—Billie Holiday. The audience requests “God Bless the Child” and Karla explains it’s one of the songs Holiday wrote herself, and how it’s a song about “self-reliance,” and then Rakka moves over to Linnaea’s piano, and the two improvise a heart-wrenching version of the song. You could hear a pin drop except for the espresso machine hissing in the front room.

There’s so much more to her show, like her dancing tips—walk in time to the music, move really slow and pretend to smoke a fake cigarette, and spell out words with her body.

She closes her set by gathering everyone in a circle and giving each section something to sing in-the-round, like a gospel revival, and my wife and I are assigned to sing, “Ohhhh yeahhhh,” in a low funky tone whenever Karla points to us, and the whole room sounds amazing with Karla singing over it all.

And that was how I spent my Saturday night. “Ohhhh yeahhhh.”