A Fresno printmaker tells stories at the Art Center

A lot of my prints have a melancholy feel,” said printmaker Nick Spohrer. “There’s a loneliness and they’re about companionship and seeking or searching for something.”

The artist, a faculty member at Fresno City College, creates each new image as part of a series, usually numbering four to 12 pieces. He works on a single series, and a single piece at a time. An individual woodcut can take six weeks to complete, if he works non-stop.

His process, reductive woodcutting, is painstaking. He starts with a single piece of wood, basswood, with a basic outline of what he intends to create. From there he carves shapes and figures into the wood. Then he applies a single color of ink and rolls the paper through. He begins a second round of carving, followed by a different color of ink. And then a third. Each print takes 20 to 30 different colors, and by the time Spohrer is done the wood cannot be re-used for future prints. As he works, he has to run as many pieces of paper through each color as he wants. The block of wood has been carved to practically nothing, hence the term “reductive” woodcutting. 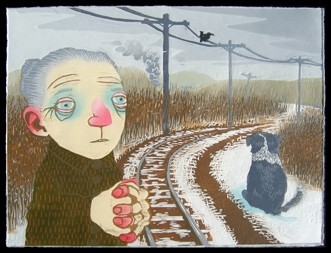 In the first series displayed on his site, Red Beard Press (so named because he was accused of resembling Van Gogh), pink-nosed men and women wait in hoary landscapes dominated by snow. A certain wistfulness of expression, the suggestion of a passing train, and faces creased with wrinkles and lines communicate an overpowering sense of melancholy. The only relief is a gray-blue dog who frolics with the kind of abandon only achieved by animals and small children.

Spohrer lived for a time in Nebraska, where he received his Master of Fine Arts in 2005 and Missouri, where he was an art lecturer at Truman State University. Though he created this series, “A Walk Around the Lake,” in California, the landscapes of the Midwest were heavy in his mind. And the colors—muted brown and a shade that fails to distinguish blue from gray—are worlds away from California. Ears, noses and fingertips blushing a bright shade of pink and eyelids circled in turquoise are an exquisite relief from the landscape, though they are sickly as well.

“I was thinking about anxiety,” he explained. “The train sort of represents paths that you could take, things coming or going that you don’t really have any control over. And then the dog showed up as a counter-balance.” 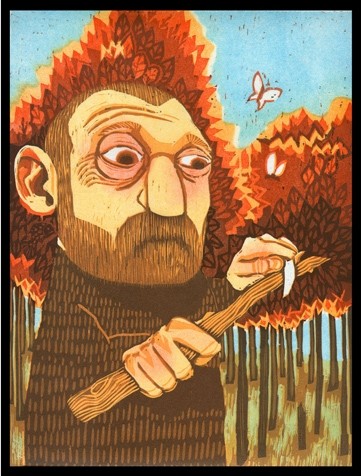 When Spohrer says that the dog showed up, he means it. He might start a piece with a visual that he’d like to capture, but that is usually just a starting point, and deliberately vague. If he knows exactly what he intends to do before he begins, then the process of constructing becomes a task, robbed of creativity.

Spohrer’s distinctive figures have evolved since his undergrad years when his emphasis was on realism. When he realized that he was more interested in narrative painting, he began to move in a different direction. 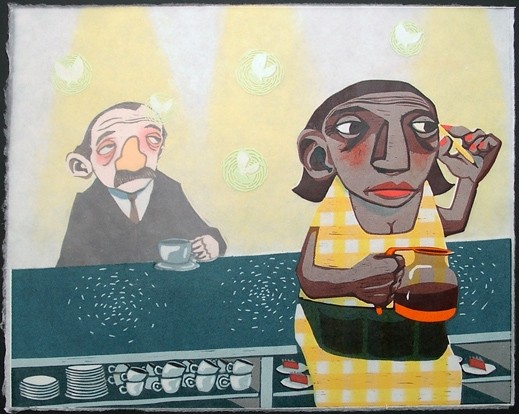 “I feel like realism and narrative can get a little heavy,” he said. “I was trying to distill the figures down to be really expressive. I focused on their faces and hands.”

The stories that Spohrer tells, through unending cycles of ink and carving, are not woven from elaborate plots. They are, at their core, emotions and situations that resonate for reasons that are not always easy to discern.