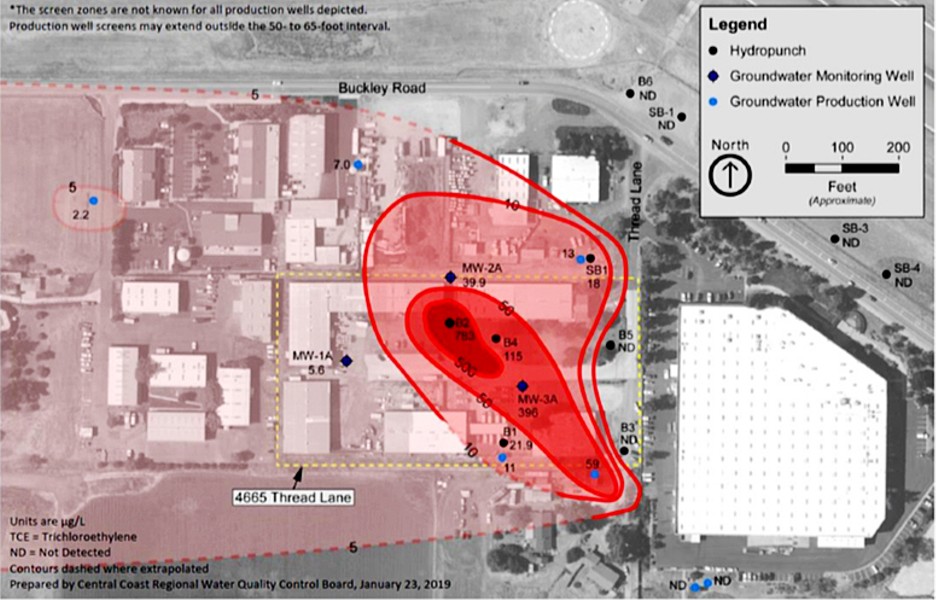 Image Courtesy Of The Central Coast Regional Water Quality Control Board GROUND ZERO Water investigators allege that a property with a machine shop (pictured) was the source of a trichloroethylene (TCE) leak near the SLO County Airport. The darker red indicates higher levels of TCE, a carcinogen.

A nearly four-year-long investigation into how a chemical known to cause cancer showed up in the water of more than a dozen rural wells by the SLO County Airport has finally concluded with an alleged culprit.

Central Coast Regional Water Quality Control Board investigators say that Noll Inc., a machine shop on Thread Lane, is responsible for the trichloroethylene (TCE) leak that contaminated at least 14 wells in the Buckley Road area.

The regional water board zeroed in on the 4665 Thread Lane property after recent water samples from under the site showed TCE levels that were 157 times above the federal drinking standard. Officials concluded that the site marked ground zero for the 1/2-mile-by-1/3-mile overall TCE plume.

"We know the hotspot's below that property," said Greg Bishop, a senior engineering geologist and site cleanup program manager at the regional water board.

On May 3, the water board issued a draft TCE cleanup and abatement order to Noll Inc. If finalized, it would require a full cleanup of the contamination and force Noll to provide replacement water to the affected residents and businesses in the interim.

"The Central Coast Water Board concludes that the dischargers have caused or permitted TCE waste to be discharged," the draft order reads, "and have caused the creation of a condition of pollution and nuisance to adjacent, downgrading, and nearby land owners."

If ingested or inhaled at unsafe levels, TCE can have causative effects on cancers like kidney and lymphoma, and bring about other health complications, especially prenatal, according to the SLO County Department of Public Health.

Janice and John Noll, the listed Noll property representatives, did not return requests for comment from New Times.

Investigators believe that the TCE spill likely occurred decades ago. TCE is a manmade solvent commonly used as a degreasing agent in machining operations before it was largely phased out of the industry in the 1970s, according to the water board. Founded in 1956, Noll Inc. specializes in lead screw and drive assembly manufacturing, per its website.

A similar but less toxic substance, TCA (1,1,1-trichloroethane), often replaced the use of TCE in machining. In its investigation, the water board found TCA in Noll's waste manifests, as well as in the groundwater. In addition, investigators said the property owners acknowledged that TCE had been used to clean typewriters in the building, and that other tenants at the property may have used TCE in the past.

Bishop said he doesn't know exactly when and how the alleged spill occurred.

"Typically, these are accidents, and they just sort of happen. Things spill on the ground," he said.

The contamination is believed to have occurred some time before 1995—which was the year that TCE was first detected in an industrial supply well in the Buckley Road area. The EPA didn't classify TCE as a human carcinogen until 2005. It was one residential well owner's discovery of TCE in 2015 that kicked off the recent investigation. Of the 14 wells that have since tested positive for TCE levels above safe thresholds, most have a known treatment system in place.

SLO County environmental health officials told New Times that any new groundwater wells proposed in the affected area will be required to test first for TCE. If TCE is found, the water can be treated with a granular activated carbon system.

"The good news is it's really easy to remove, and the treatment is not expensive," Environmental Health Supervisor Leslie Terry said.

The water board's winding search for the source of the TCE included testing at the SLO County Airport, which came at a $592,711 cost to the county. Those tests eliminated the airport as a potential culprit. The investigation also touched area property owners like Alan Strasbaugh, who told New Times in 2017 that he spent $50,000 in connection with the water board's investigation.

Noll Inc's water testing was delayed due to financial hardship claims by the owners, according to the water board. The Nolls, and some others who made claims, eventually received financial assistance via a water board grant program that allowed the testing to go forward last year.

The water board's draft cleanup order states that it doesn't "prevent other parties or persons affected by TCE pollution from taking an independent action." It sets a deadline of Aug. 13, 2019, for Noll to submit a cleanup and monitoring plan.

The order is currently open for public comment through June 14. It will be the subject of a meeting at the water board offices in SLO on May 21. Δ