With the opening of its new pier plaza, a record-breaking heat wave, and other neighboring beaches closed due to COVID-19 concerns, the most recent Labor Day weekend was a busy one in Pismo Beach. It led to a sudden boom of sidewalk vendors selling food and merchandise near the pier and beach, and with the vendors, came complaints.

Now, the city is holding vendors to more stringent regulations. 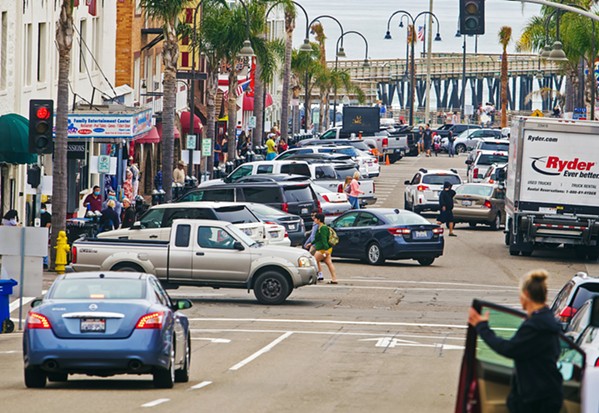 At a meeting on Sept. 15, the Pismo Beach City Council unanimously passed an urgency ordinance that lays out new requirements and guidelines for sidewalk vendors that City Manager Jim Lewis says will ensure vendors are meeting health and safety standards.

"It's more about making sure people are registered," Lewis told New Times, "having health inspections, and being a legitimate business that we can hold accountable for health and safety purpose."

Under the ordinance, which is already effective, vendors are required to obtain a business license and vendor permit—both of which cost about $100—before operating within city limits. The vendor permit must be renewed annually, according to a city staff report, and can be revoked. Vendors are also required to get a state tax certificate and any necessary health and safety approvals from the county.

Lewis said the urgency ordinance gives staff time to develop a more thorough ordinance while still offering a way to regulate vending. Pismo hasn't had a problem with sidewalk vendors in the past, and Lewis said the explosion of complaints over Labor Day weekend caught city staff by surprise.

"We just want to make sure should that happen again, we're able to regulate it," Lewis told New Times. "And we feel that keeping vendors off the pier and beach are important to the health and safety of our guests, and maintaining a quality experience for people, and making sure that they aren't badgered or having to walk out of the way of things, or being concerned about their safety or being confronted by people. Especially during these times when people are trying to stay isolated in groups and trying to keep distance." Δ