Writing a memoir is a very personal thing. You peer into your past and decide what secrets you want to reveal to strangers. Likewise, writing a biography looks into another's past, curating what important things you want to reveal about your subject. In the case of Pismo Beach author Raymond H. McDonald, he's done both with Merle Haggard Was a Friend of Mine, which reveals McDonald's early years as well as where his life overlapped and intersected with Haggard's. 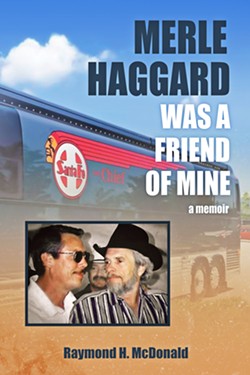 McDonald begins by writing about his Native American heritage and peripatetic childhood, traveling from place to place with his typesetter father, who eventually took a job at The Bakersfield Californian and brought his family to a dilapidated "mansion" on Truxtun Avenue in Oildale.

One of McDonald's school-age memories entail his experience with nuclear bomb drills in school.

"We weren't stupid," he wrote. "We knew about Hiroshima and Nagasaki. I remember locking eyes with my classmates as we huddled together beneath our desks, disbelieving this was a solution. I always thought if a bombing raid happened, we might as well go out to the playground, watch the mushroom cloud, and kiss our proverbial asses goodbye!"

McDonald writes about another shocking childhood memory after his father moved the family to Hollywood. He and his younger brother Danny were standing in front of their new apartment building when a woman pulled up and offered to take them on a Hollywood tour—something that today sounds very dangerous.

"She was blonde and beautiful, probably in her early 30s," McDonald wrote. "We were two kids under 10 years of age, with no adult supervision and without a care in the world. Hell yeah, we wanted to go for a ride around Hollywood with a pretty lady in a convertible."

Did he tell his mother after their safe return?

"Back in 1959, I guess it was no surprise that people were much more open to strange things that happened that are not commonplace today," McDonald said in a recent New Times interview. "I did not tell my mother or my father that my brother Danny and I hopped into a car with a strange lady. She drove us around the hills of Beverly Hills and brought us back safely. I know it's weird, but it happened."

In Oildale, he also remembers running everywhere as a kid, including home for lunch because he was too poor to have lunch money. He warmly remembers the one time his mother gave him a quarter for lunch and he ate with his friends.

He also offers a moving recollection of the JFK assassination, memories of the Watts Riots after another move to LA, and meeting his two best Oildale friends, Buddy and Mike Owens, who happened to be the sons of country music legend Buck Owens, which led directly to his meeting Merle Haggard.

Haggard unquestionably became a country music legend, with more than three dozen No. 1 hits like "Okie from Muskogee," "It's All in the Movies," and "Poncho and Leftie" with Willie Nelson. He was also a rabble-rouser in his younger days, eventually doing a stint in San Quentin, where a prison concert by Johnny Cash on New Year's Day in 1959 cemented Haggard's desire to pursue music as his career.

After divorcing his first wife, Leona Hobbs, Haggard married Buck Owens' ex, Bonnie Owens, which is when McDonald came into Haggard's life. Out of a deep desire to return to Oildale from LA, where his father had once again relocated them, he moved in for a school year with Buddy and Mike; their mom, Bonnie; and her new husband, Merle. It was the start of a friendship that spanned more than four decades.

Raymond was just 14 when he met Haggard. Did he have any idea of his fame, or Buddy and Mike's dad Buck's fame? Or did it not really register he was rubbing shoulders with country music greats?

"Buck was already a national country music star when I met him and his children in 1964, so I was aware of his fame," McDonald explained. "Merle was just beginning his career, but we knew he was on his way to superstardom because of his incredible singing talent."

In the book, McDonald shares the story of a fishing trip with Haggard when he pulled out a pistol from under his car seat and began shooting at a crow, and later after landing a Sacramento sucker fish, he shot it too.

Wasn't it a shock to see an adult pull out a pistol and crack off shots at a crow and later a fish?

"Merle surprised us with his gun the morning that he tried to shoot that crow, but he was really mad at that fish that he didn't like, and it surprised us because Merle had been in San Quentin Prison just a few years earlier and probably wasn't supposed to even have a gun," McDonald explained, "so I find it interesting that Merle hid that gun from us until that moment."

Don't go thinking McDonald paints Haggard as some crazed wild man. On the contrary, McDonald clearly looked up to Haggard and throughout the book praised his generous spirit and kindness. Along the way, McDonald reveals his own interesting story. For instance, he dabbled in music and worked as a disc jockey. Does he have any regrets not pursuing a music career?

"I sang in a nightclub in Las Vegas for four years, Thursdays through Sundays, and really enjoyed it, but I was never of the caliber to become a recording artist," he admitted. "I was just good enough to keep the folks dancing, drinking beer, and gambling. I have no regrets about not trying to pursue a musical career because frankly I just wasn't good enough.

"In the chapter I titled 'Ray-Baby from K-Baby,' I mention that I worked in San Luis Obispo in 1975 at an AM radio station called KATY. It was a hoot! I loved playing rock 'n' roll on the radio," he continued. "Other than driving Merle's bus, DJ work was my favorite job."

What about future writing projects? Any next book in mind?

"No," he said emphatically. "I've no intentions on writing anything further. Writing is exhausting work and I'm too damn lazy. It took me four years to write the book. I had immense help in the editing department from my son, Benjamin McDonald, who's a writer, and my lifelong friend Rebecca Shearin, who put the entire book together, and my older sister, Connie McDonald, a retired school teacher. Had it not been for their assistance, the book wouldn't have been possible."

It's a must-read for fans of Haggard because McDonald had a unique view. We learn, for instance, where the inspiration for Merle's first No. 1 song, "The Fugitive," came from. We also hear about how McDonald was in the recording studio during the recording of "The Bottle Let Me Down," which happened to feature Glen Campbell singing backup.

McDonald saw country music history being made right before his eyes. Δ