At its April 5 meeting, the City Council approved a second reading of the ordinance as part of Assembly Bill 481. Gov. Gavin Newsom signed the bill into law in September 2021, and it required law enforcement agencies—in this case, the Pismo Beach Police Department—to get approval from a governing body to use military equipment. 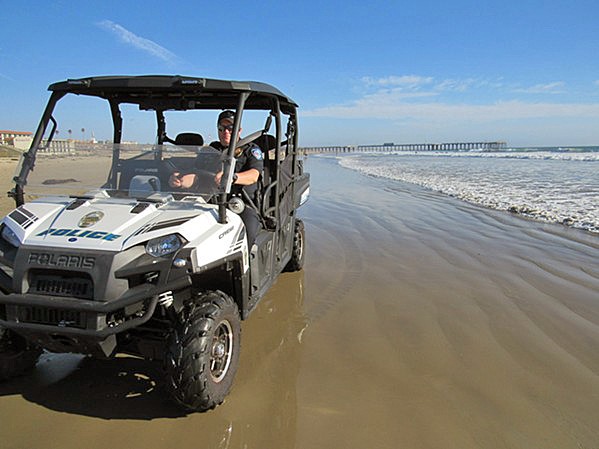 But the term "military equipment," City Council said, was a misnomer.

"There is a difference between military surplus and equipment that is specifically made for law enforcement. I think that is the crux of the position," Assistant City Manager Jorge Garcia told New Times. "Many of the items that you see on the list were built and designed specifically for law enforcement and because of the definitions in AB 481, they are now on this list but they are not military equipment or military surplus. The only thing that was military surplus was the Humvee. That's an important distinction and what we see as a gap between the bill and the actual practice and implementation of it."

Jeff Smith, Pismo Beach's police chief, made a similar statement about the legislation's broad definitions at the March 15 meeting when the ordinance was initially discussed. He also said that SWAT operatives handle distraction devices that emit loud bangs and flashing lights, which are classified as "military."

"It's important to me to have as many or more less-lethal options than there are lethal options. We have a 40 milimeter projector, which is a big foam projector that would knock someone down or take the wind out of them and take them into custody," Smith said in March. "I got rid off all shotguns, which I felt were very old, ... less accurate, and felt our agency didn't need anymore."

Garcia told New Times that the Humvee is only used for branding and marketing. Once it's no longer serviceable, the Police Department cannot automatically replace it. It would require a separate approval from the City Council before new equipment is purchased.

But Councilmember Sheila Blake expressed fear at the March 15 meeting.

"Apparently, we need some equipment to control a riot?" she asked. "Some of this is nuts. It kinda scares me a little bit. It's almost as if someone is trying to take inventory of what we have for defensive weapons."

Smith replied with a reminder that 16 years ago to the day, an active shooter took the life of two people and injured others at Pismo Beach's Denny's restaurant.

"That's why we do have this equipment. In the event that we do need it, we are able to respond, act, and hopefully protect the lives of our citizens, our visitors, and our business owners," Smith said.

After being informed by City Attorney David Fleishman that a majority "no" vote would prohibit police staff from using the listed equipment, such as less-lethal pepperball launchers, rifles, and tear gas, Blake and the other council members greenlit the ordinance. It will go into effect 30 days after the approved second reading that took place on April 5.

"I think its important for the community to understand the equipment that law enforcement has access to, and if that leads to better transparency, absolutely. For us, we want to make sure the safety of our public and staff are always No. 1," Garcia told New Times. Δ