A Pismo Beach City Council member is suing the city of Atascadero and two of its council members over their rejection of a proposed self-storage project through means that he claims violated city code.

On June 25, Scott Newton filed a civil lawsuit in SLO County Superior Court alleging that the city of Atascadero and Atascadero City Council members Heather Newsom and Susan Funk violated his constitutional rights and city code when they rejected his application to build a self-storage facility between Viejo Camino and El Camino Real streets. The City Council, Newton alleges, denied his project despite repeated support from the Atascadero Planning Commission and zoning that allows for self-storage development in the area. 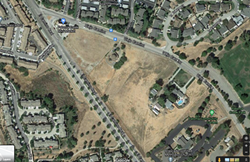 Newton, who was elected to Pismo Beach City Council in November 2020 and owns two other self-storage facilities in Morro Bay and Nipomo, said he decided to fight Atascadero's decision because he has zero tolerance for "corrupt" politics.

"The real problem is how many people get stepped on by government because they can't afford to do anything about it," Newton said, estimating that this lawsuit will cost him more than $100,000 in legal fees when all is said and done.

In the complaint, Newton alleges that both Newsom and Funk showed bias against his Dove Creek Self-Storage project and acted as judges during council hearings regarding their own appeals of the project's approval. They skirted other city rules, too, according to Newton's complaint, and as a result, he says Atascadero City Council's denial of the project should be void.

Newton, according to the complaint, first met with the city regarding the Dove Creek Self-Storage project in 2018. The project initially included 81,000 square feet of self-storage in eight buildings and a caretaker's residence.

Although Newton claims in the complaint that his proposal is on a parcel of land properly zoned for self-storage development, the Atascadero Design Review Committee recommended denial of the project, saying self-storage wouldn't be the best use of the land.

Still, the Planning Commission approved different variations of the project twice in 2019, according to the complaint. That decision was appealed by then Atascadero City Council member Roberta Fonzi, who had previously served on the Design Review Committee and recommended denial there. City Council reversed the Planning Commission's approval of Newton's project on Sept. 10, 2019, according to the complaint, and Fonzi refused to recuse herself during the hearing.

In January 2020, City Council considered an amendment to the city's general plan that would have eliminated self-storage as an allowed use in the "P" Zone, where Newton's project was proposed. When the city did not eliminate self-storage as a use, Newton claims he was encouraged to proceed with his Dove Creek project.

After several meetings with city staff throughout 2020, according to the complaint, Newton revised his project proposal to be 32 percent smaller with a smaller footprint, fewer environmental impacts, and no caretaker's unit.

Though Newton claims Newsom and Funk filed their appeals as individuals and not on behalf of City Council, the complaint alleges neither were required to pay the appeal fees that other residents would be subjected to. During hearings on the appeals, both Funk and Newsom refused to recuse themselves from voting on the Dove Creek Self-Storage project.

"Because of the defendant's actions," the complaint reads, "Newton is entitled to a preliminary injunction and writ of mandate compelling defendant city to void the council vote of June 9, 2021, which will allow the Planning Commission decision of May 4, 2021, approving Newton's project to stand."

Terrie Banish, Atascadero's deputy city manager, said in an email that the city could not comment on the lawsuit due to pending litigation.