Pismo Beach considers solutions to its increase in litter

Despite COVID-19 and the resulting travel restrictions and stay-at-home orders, Pismo Beach has actually been busier than usual throughout the pandemic. The excess of visitors combined with an increased reliance on takeout food orders and the completion of Pismo's pier plaza, according to city staff, have created a citywide trash problem.

"One of the big things that we saw was that restaurants moved to a takeout-only model, and they didn't have trash facilities," Public Works Director Ben Fine said at the Jan. 19 Pismo Beach City Council meeting. "And so when you look at the amount of trash generated by the takeout food versus the number of cans that we had, there was an imbalance. There was much more trash than we're capable of really collecting and storing between pickups." 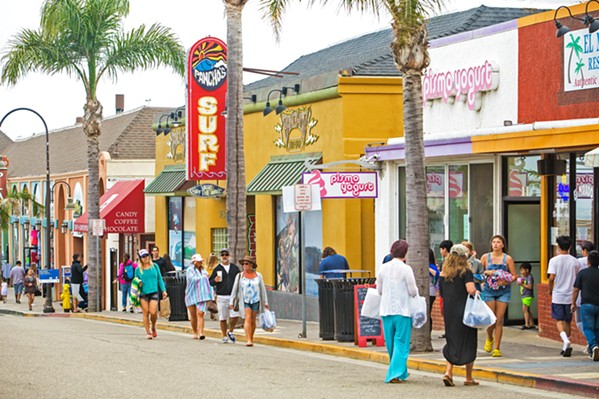 At the meeting on Jan. 19, Fine presented a 30-page report on Pismo's trash issues and potential solutions, including different kinds of garbage cans and outreach efforts that would encourage beach visitors to dispose of their trash properly.

Although Pismo added a huge number of waste and recycling bins to its existing stock with the opening of the pier plaza, the report states that most trash cans in the downtown pier area are typically filled within just a few hours of being emptied. When trash cans are full, city staff say people tend to set their trash on top of or next to the cans, allowing wind and birds to scatter garbage throughout town and onto the beach.

In October 2020, Pismo Beach City Council voted to reinstate one full-time maintenance position and add three part-time maintenance positions, all who are dedicated to picking up litter and emptying trash cans in the pier plaza area. Even more staff will come on in the summer, and Fine said he believes those workers will all help the city improve the situation.

The rest, he said, depends on whether the city can promote better human behavior through education and trash bins that are easy to use and access.

Finding the right bin itself requires a delicate balance, Fine said. Trash bins without lids tend to be easily picked through by seagulls and other birds when full or close to it, but it's a generally accepted psychological fact that people hate to use garbage cans with flaps and lids that have to be touched. Even when Pismo's lidded bins aren't full, Fine said people tend to set their trash on top of or around the them rather than inside, presumably to avoid touching the cans.

"Well it doesn't take long for the wind to come blow this stuff away," Fine said.

Pismo recently piloted a high-capacity compacting trash can, which can hold more than five times a regular can and alerts workers when it's full, but Fine said city staff found several issues with that option. It's costly, went into error mode frequently, and holds so much trash that it was nearly impossible for workers to empty it.

"So really we need to focus on education," Fine said.

Anti-littering signage is posted all around Pismo Beach, and the city is also part of the SLO County Integrated Waste Management Authority's social marketing effort to educate the public on the dangers of litter, Central Coast Clean.

Still, Councilmember Marcia Guthrie pushed city staff look further into lids and trash cans that would be difficult for birds to get around and easy for people to use, including those with foot pedals.

"I think we can all agree that the push-fly things are gross and icky and don't belong in public trash cans," Guthrie said. "But it's easy to change the tops." Δ