Pismo Beach is fodder for a playwright 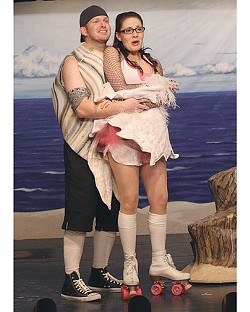 New Times You are all over the place in the theater community.

Erik Stein I was in Utah for four months at the Utah Shakespeare Festival and then at PCPA for the past three months.

New Times Tell me about your experience at the Utah Shakespeare Festival.

Stein It’s a wonderful company. They won the Tony Award for best regional theater in 2000. They get actors from all over the country who I get to work with, ones who specialize in classical theater, which is new for me, so it was a great learning experience—an extended training. These people are Shakespeare scholars.

New Times In between all of this when did you have time to write Under the Boardwalk?

Stein I had been thinking about it for awhile, and I came up with this character MC Clammer a couple of years ago and thought I would write a vaudeville for the Melodrama, about the area [Pismo], with Clammer as the main character, and as I was thinking about the vaudeville, I thought about rival gangs who don’t like each other, but when people fall in love like in Romeo and Juliet ... so what if a clam fell in love with a seagull? While I was working in Utah with George Walker, and while we were there we were goofing around with the song, “I kissed a girl and I liked it,” by Katy Perry, but we sang “I kissed a gull and I liked it” and I thought, “I might have a play here.” We threw around a simple idea—instead of boy meets girl, boy gets girl, boy loses girl, it’s clam meets gull, clam gets gull ... we wrote it to be really silly and ridiculous, but still to be that traditional story that so many plays and movies are centered around. I also thought it would be fun to do a show with contemporary music but that was familiar as well at the Melodrama. Eric Hoit came and visited me in Utah this summer and I told him about the idea and he said, “Sounds good, I think you should write it” and I didn’t give it much thought and then the brochure came out and the play was listed in it with my name under it. Nothing will get you to write a play faster.

New Times George Walker returning to the Central Coast is kind of a big deal, no?

Stein They work all over the country (George and his wife Megan). An actor’s life, especially in your 20s, is kind of a gypsy lifestyle, but we are grateful they are back.

New Times Have you seen the show?

Stein Yes, several times, it’s really cool for me to see this thing I wrote come to life on stage and sometimes I just sit and watch the audience which might be a little creepy. [Laughs].

New Times What reactions have you seen from audience members?

Stein My favorite thing is how surprised they are—the look on people’s faces like, “Are they going to go there?” and then when we go there, their eyes get so huge. As an actor you don’t get to step out and watch the things we create—we are always in the midst of it. So as a writer, standing on the outside is cool.

New Times It’s a different show for the Melodrama.

Stein It’s a bit more contemporary than the Melodrama normally does but we are trying to be hip but without alienating some audiences. The songs are either extremely familiar, or the lyrics are so ridiculous that you will be pulled into so quickly, you will still have a great time because it’s so much fun. ∆

Christy Heron knows only about unrequited love. Pour some sugar-love on her at cheron@newtimesslo.com.