Pismo Beach local's new book, The Daring Decade, takes a deep dive into what made the 1970s a revolutionary time for film

The Daring Decade (Volume One, 1970-1974): The Exciting, Influential, and Bodaciously Fun American Movies of the 1970s, by Chris Strodder, is available for purchase on Amazon. Readers can expect Volume Two, 1975-1979 to be released later this summer.

What makes a good movie, great? Is it the acting? The special effects? Must the film have new, innovative, or groundbreaking themes? Or is it something even less tangible: the ineffable way that some films just make us feel?

While everyone has a favorite movie—or perhaps a few—one era in particular seems responsible for an inordinate number of great films: the 1970s, or as local author Chris Strodder prefers to call it, "The Daring Decade." 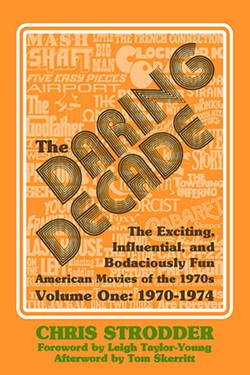 "I kept running into this phrase: 'The greatest of all time,'" Strodder told New Times. "After watching thousands of movies ... I realized that this phrase was true. This really was the greatest period ever for movies, and it wasn't just my belief based on nostalgic high school memory. Many experts have come to the same conclusion."

Strodder, who grew up in the midst of this iconic wave of filmmaking that the '70s ushered in, has spent the last 50 years watching, rewatching, studying, and analyzing movies like The Godfather (1972) and The Exorcist (1973), films that today are canonized for their revolutionary approach to film.

With the 50th anniversary of many early '70s films fast approaching, the Pismo Beach local decided it was time he wrote his decades of observations and analysis into a book: The Daring Decade: The Exciting, Influential, and Bodaciously Fun American Movies of the 1970s. Split into two volumes, Volume One, 1970-1974 of the book was published in December 2019, and Volume Two, 1975-1979 is coming later this year.

"It's not just a compilation of plot summaries, and it doesn't recycle any lame internet trivia," Strodder said of the first volume. "It's my own original research to analyze and celebrate about 200 of these great movies from 1970 to 1974."

While the success of these some 200 movies cannot be boiled down to any one element in particular, Strodder has identified a few key reasons for why the '70s were such a hotbed for film greatness.

"The real significant change had come in 1968 with the end of the old production code," he explained. "This was the set of guidelines that Hollywood has been using since 1934 as rules of what you could say and what you could show in movies. You weren't allowed to have any profanity. ... Married couples had to be shown in separate beds. ... Violence had to be suggested or implied. ... All the criminals had to be caught and punished by the end of the movie."

With the production code banished and a revolutionary spirit in the air, many of the directors who today are household names made their film debuts in the early '70s.

"You get the first movies that are made by legends like Steven Spielberg and George Lucas. There's Jonathan Demme, who will win the Oscar for Silence of the Lambs—he makes his first movie in the early '70s. Oliver Stone, who will make Platoon. Clint Eastwood directs his first movie in 1971," Strodder said. "Now you have this new energy that was pushing movies from the old traditional way of making movies towards this radical new approach and these youthful, energetic new ideas."

And in addition to the innovation happening from the director's chair, technological advancements also contributed to this decade's fresh take on filmmaking.

"Computers are coming into play; there are new special effects being developed; new camera lenses are being invented," Strodder said. "So a movie like Westworld, 1973—this great science fiction movie about robots at a theme park where they all malfunction and they start killing the guests—that's the first movie to use computer generated imagery. And all of this will come to fruition with Star Wars in 1977."

While Strodder said there are plenty of great films made today, he said many of today's movies have traded quality characters and themes for mind boggling animatronics. Leigh Taylor-Young—"a prominent movie star in the '70s [who was] in Soylent Green, one of the great science fiction movies," according to Strodder—affirms this notion in her forward to The Daring Decade.

"She says that she thinks that some current movies are kind of soulless," Strodder said. "Yes, the special effects are great, but they've taken over the movie. ... Many superhero movies are amazing to look at, but they seem kind of artificial and superficial."

Nevertheless, Strodder said that there are directors and films today that continue to capture the richness and soul of the great '70s movies.

"In Quentin Tarantino's movies, for instance, he is using '70s music, sometimes '70s movie stars. The Kill Bill movies, those are clearly derived from genres established in the 1970s," Strodder said. "His latest, Once Upon a Time ... in Hollywood—it takes you right back to 1969 with the details and the themes and the music."

Whatever movie or era of filmmaking is your favorite, Strodder's fascinating and informative book shines a spotlight on why the '70s were particularly important. His own passion and excitement for this decade can be felt on every page.

"They say, 'Write the book that you yourself want to read,'" Strodder said. "This is 50 years in the making, and it's the book I've wanted to read since watching these movies in the 1970s." Δ