Pismo Beach: Measures H & I pass, council races go down to the wire 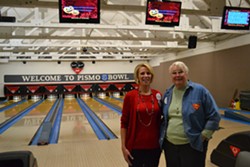 As of press time on Nov. 5, Pismo’s Measure H—authored by activist group Save Price Canyon and intended to preempt mega-development in the Price Canyon area—was passing by a 65.7 percent to 34.3 percent margin.

Measure I—a renewal of the city’s half-percent sales tax—passed by an even-larger 71.2 percent to 28.8 percent tally.

Turnout in Pismo Beach was resting at 49.6 percent of registered voters on Nov. 5, though that number is likely to rise as roughly 850 additional mail-in and provisional ballots from Pismo are counted in coming days.

Those additional votes will be crucial for the unbelievably close races for two City Council seats, as well as the city’s mayoral seat.

For the mayoral seat, incumbent Shelly Higginbotham narrowly led with 50.16 percent (1,252 votes), and challenger Kevin Kreowski was nipping at her heels with 49.56 percent (1,237 votes).

During their election night soirée at Pismo Bowl, Guthrie and Blake—both founding members of Save Price Canyon—took turns bowling frames and eagerly checking laptops, cell phones, and tablets for the latest election results as classic rock blared over the speakers and supporters danced.

Both candidates told New Times they were elated by the strong mandate demonstrated by the passage of Measure H, which they said was indicative of widespread discontent with the status quo in Pismo that has previously favored developers. Guthrie was incredulous that she was tied despite the more than 2,500 ballots cast in Pismo Beach thus far.

“If I am elected, my No. 1 goal is to re-motivate Pismo Beach and build confidence with our residents that the City Council will once again be listening,” Guthrie said. “We’re all in this together.”