The Pismo Beach Chamber of Commerce is making its stance on a proposal to ban off-roading at the Oceano Dunes perfectly clear: The move, it says, would hurt local businesses.

On March 14, the Pismo Beach Chamber plans to host a protest of the California Coastal Commission's recommendation to eliminate off-roading at the Oceano Dunes State Vehicular Recreation Area (SVRA) within the next five years.

"It's not just the dunes," said Lisa Kruitbosch, a Pismo Beach business owner and volunteer with the Pismo Chamber. "It is so large, the impact that it will have on the community." 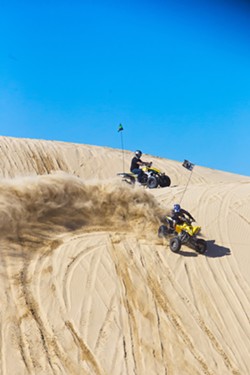 At a meeting on March 18, the Coastal Commission is slated to consider a staff recommendation to strengthen sensitive habitat conservation efforts in the Oceano Dunes while eliminating off-roading and most street-legal vehicle access in the park by 2026. If passed, off-roading and most street-legal vehicle access in the SVRA would be phased out over the course of five years, a process that staff said could start as early as March 19 of this year. Only State Parks and emergency vehicles would be allowed on the beach as of 2026, except between West Grand and Pier avenues, where drive-up beach camping would continue indefinitely.

Staff also recommend closing the Pier Avenue vehicular entrance to the beach by July 1 of this year, restoring the area to a natural shoreline edge with biking, pedestrian, and equestrian access and the "typical beach area public access amenities."

But the SVRA is the only state park in California where recreational driving is allowed on the beach and dunes, and Kruitbosch said that unique feature brings tourists and their money to businesses across South County. After talking with a number of business and hotel owners in Pismo Beach, Kruitbosch said it's clear that the local business community relies at least partly on off-roading tourists.

The upcoming protest, according to Pismo Chamber Chairwoman Valerie Mercado, is an attempt to get the word out about the March 18 meeting. Protest attendees will gather at the Grand Avenue entrance to the SVRA at 2 p.m. on March 14, where speakers in support of continued vehicle access will take the stage. At 6 p.m., attendees with masks and gloves will hold hands in a line across the dunes.

"The ultimate message is the fact that it impacts the business community," Mercado told New Times.

An economic impact study conducted and published by a Cal Poly professor earlier this year concluded that a near seven-month ban on vehicles in the Oceano Dunes during the pandemic had no significant impacts on businesses or tourism in surrounding communities. The study found that Oceano's transient occupancy tax revenue increased for several months during the closure compared to the same months the previous year, while off-roading was allowed.

But Mercado said most coastal communities in California saw spikes in tourism during the pandemic, largely, she said, because COVID-19 safety orders left Californians with nowhere else to go. That study, she said, didn't offer an accurate picture of what a vehicle closure in the dunes would really mean.

Mercado said she works directly with local business owners almost every day, and they're largely against a ban on vehicle access.

"If we're not going to stand up for them, who will?" she said.

The city of Grover Beach is also working on a letter to the Coastal Commission, outlining its concerns about the recommendations and possible impacts to the local economy.

Although the Grover Beach City Council agreed at a March 8 meeting not to take an official stance on the Coastal Commission's various recommendations, they took issue with several portions of the plan.

Grover Beach City Council also said they'd like to see a reputable, peer-reviewed economic impact report regarding off-roading's impacts to South County and a traffic impact study regarding the possible closure of the Pier Avenue SVRA entrance. Councilmembers also agreed that if vehicle access were to be phased out, businesses would need longer than five years to adjust.

Councilmember Mariam Shah said that more than anything she just wants to see some kind of final and permanent plan for the dunes so that SLO County residents and businesses can move on.

"Our area has been dealing with the indecision for 40 years," Shah said, "and it is time for a true plan for everyone." Δ