As it eyes plans to revamp its downtown core, members of the Pismo Beach City Council voted to extend a temporary moratorium on tattoo parlors, smoke shops, and other businesses deemed "inconsistent" with the city's future plans. 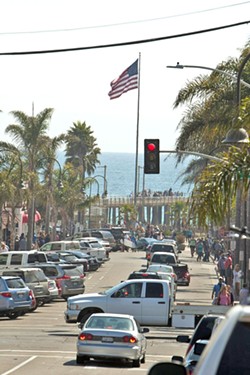 The moratorium prohibits the approval, expansion, or relocation of those businesses, meaning that ones currently operating in the city can continue to do so.

The extension on the urgency ordinance comes as the council is moving forward with plans to overhaul its commercial core to better promote food, wine, and "unique specialty retail" businesses. Those plans include adding new hotels and restaurants and an $8.7 million renovation of its pier and plaza area downtown, as well as a $12.2 million streetscaping project along Shell Beach road.

Lewis said the list of businesses was developed because they were not consistent with the council's vision for the city's commercial areas.

"I think people really appreciate that you are trying to step up your commercial community core," Lewis told the council. "These are all things where you are really trying to elevate the experience there."

The 10-month extension would give city staff time to draft a permanent ordinance overhauling regulations on the businesses included in the moratorium, which they would bring back to the council for approval before December.

"We are going to go through the regular process later on this year through the Planning Commission and council and refine them as needed," Mayor Ed Waage said.