Pismo Beach could soon be home to another set of affordable housing units.

At a meeting on April 7, Pismo Beach City Council unanimously voted to begin negotiations with the Housing Authority of San Luis Obispo (HASLO) regarding a proposed mixed-use senior housing project at 2655 Shell Beach Road. Although the potential project has a long way to go before it's officially approved, council members showed overwhelming support for the initial proposal. 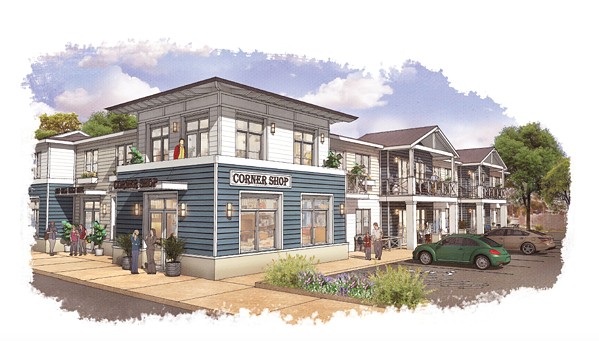 "This particular housing plan is exactly what I've been looking for for a long, long time," Councilmember Sheila Blake said at the April 7 meeting, later adding, "These places are desperately needed."

If approved, the project would include 21 affordable one-bedroom senior apartments, one two-bedroom manager's unit, a 1,030-square-foot common space, a manager's office, laundry facilities, and a 550-square-foot retail space, according to a city staff report. The proposed location is close to shopping and public transit, the facility wouldn't block coastal access or views, and the housing units would be reserved for seniors earning 60 percent of the area's median income or less.

The city first discussed the possibility of such a project in November 2019, when Pismo passed its fifth cycle Housing Element and fell into compliance with the California Department of Housing and Community Development's housing regulations. After a Planning Commission review of HASLO's conceptual plan for the project on Feb. 25, HASLO requested that Pismo commit housing in-lieu fee funds, which could be used to leverage state funds and low-income housing tax credits, to help finance the project.

The HASLO project is similar to another Pismo is working on with Peoples' Self-Help Housing (PSHH) on 4th Street in Pismo Beach, according to Community Development Director Jeff Winklepleck. Pismo's housing in-lieu fee fund is currently made up of about $3 million reserved for supporting housing projects, $2 million of which is already going to the PSHH project. With City Council's April 7 approval, at least some portion of the remaining $1 million will be dedicated to the proposed HASLO project, Winklepleck said.

Although council members had some concerns regarding cash flow and funding, considering the financial hit Pismo Beach is taking due to the coronavirus pandemic, city staff assured them that the project is within the city's means.