Too much public protest and perhaps not enough evidence to support the claim that pigeon droppings near the pier are responsible for diminished water quality of several South County surf spots prompted the Pismo Beach City Council to reconsider the trapping and relocating of birds to a zoo program, where they would become food for carnivorous animals. 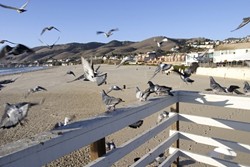 # At an Aug. 21 meeting, Pismo Beach City Council members voted 3-2 to halt the trapping and eventual destruction of pigeons that made the Pismo pier their home. The new plan, so far, is to have the birds captured and relocated to Cuyama.

Kris Vardas, a Pismo Beach City Councilmember who voted against the switch, said that there had been public outcry against the trapping plan.

"We realized maybe we made a mistake," he said.

In July, the council attempted to clean up the situation when it banned people from feeding the pigeons and voted to hire a pest control firm to eradicate the birds blaming their droppings for contaminating the water near the pier.

Vardas said the first plan wasn't given enough time to see if it made an impact.

"I felt we had to give the no-feeding ordinance a chance," he said. "We needed time to see if the netting of the pier and the ordinance was working."

Pismo Beach Mayor pro-tem Shelly Higginbotham seconded the motion to save the birds.

"I think we are doing the right thing," she said. "We are trying to reduce the pigeon population that is currently overtaking our pier and is interfering with the enjoyment of it. The choice that we made was the most logical and humane."

The council is negotiating the relocation contract which can't exceed $30,000 with the Santa Maria-based Humane Pigeon Relocation Group. The council also voted to spend $10,000 to steam-clean the pier and surrounding areas.

One local surfer and water rights activist believes the public may be confused about the issue.

"They (the council) are still spinning that the pigeons are a direct connection to the water quality," said Jennifer Jozwiak, vice chair of the San Luis Bay Chapter of Surfrider Foundation. "But before we spend $30,000 and say it's the pigeons, we really need to find out the source."

Jozwiak was referring to a study being performed by a team of Cal Poly biologists who are taking water samples to determine the dominant source of pollution. Their study is expected to wrap up by the end of 2008.