As the pickup truck climbs up the old dirt road, the superlatives are flying as fast as the dislodged dirt.

No, we haven’t stumbled upon the golden city of El Dorado, and we’re a long way from the Grand Canyon.

In fact, the truck is rumbling through a pleasant patch of oak woodland in the hills above Pismo Beach. It’s admittedly nice, but my reporter’s cynicism is beginning to kick in and reject the superlatives. It can’t be that spectacular.

Then, as we crest the ridge, I see it. Everyone gets out of the truck and gawks.

“It” is something that can’t quite be captured by pictures or words but is surely the best view in SLO County.

“It” is a 360-degree panorama with clear views of the coast from Point Sal to Point San Luis. If you turn around, you can see several of the seven sisters and all of Edna Valley.

“It” is the best argument for the Pismo Preserve project, for which the Land Conservancy of San Luis Obispo County is aiming to buy 868 scenic, privately owned acres overlooking Pismo Beach. The end goal is to make the land a nature preserve, open to the public.

The Pismo Preserve project has been in the works for several years, according to its chief planners, Kaila Dettman and Daniel Bohlman, the conservancy’s executive director and conservation director, respectively. The Land Conservancy is a local nonprofit that works to protect and preserve natural spaces from development.

“This land is like the backdrop to the city of Pismo Beach, and it has fantastic views,” Dettman said. “It’s an excellent piece of property to purchase in order to benefit the public.”

Dettman said that the owners of the property—a Delaware corporation named PB Coast View LLC—approached the Land Conservancy roughly two years ago. The landowners were hoping to sell the property and wanted to keep it in its natural state.

After a year of negotiating, the Land Conservancy and PB Coast View have reached a deal. For $11.7 million, the owners will give the 868-acre property to the Land Conservancy. Both parties have agreed upon a deadline of Aug. 1, 2014, for reaching a final agreement.

That price is all-inclusive, and will cover land transfer legal costs, public access improvements (including a large parking lot off Mattie Road, a bathroom, and signage), and a $1.2 million endowment established to maintain the preserve in perpetuity.

When asked about the sticker price, Dettman emphasized that the owners are selling the property for “well below market value.” An updated appraisal for the property will be finalized in late February, and Dettman said she expects that number to be “several million dollars” higher than the sale price.

Dettman said her nonprofit’s two primary sources of funding to cover the $11.7 million cost will likely be two state agencies: the California Coastal Conservancy (based in Oakland) and the Wildlife Conservation Board (based in Sacramento). 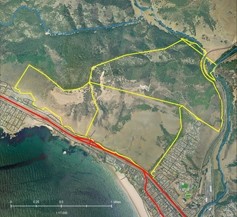 “We’ve talked a lot with the boards of both agencies, and they’re both very interested,” Dettman said. “We still have to take it through the normal process of board approval to make it official, but we are optimistic that we can receive somewhere between $4- and $5 million dollars from each agency.”

With that $8- to $10 million close to secured, the Land Conservancy is now turning to a combination of private donors, local foundations, local government, and the general public to fund the remaining $1.7- to $3.7 million.

“This project will not be possible without local assistance, and we’re hoping that the SLO County community will be able to help us,” Bohlman said. “This preserve will be for everybody.”

SLO County Supervisor Adam Hill, whose 3rd District includes the Pismo Preserve, said there is a “good chance” that the county will be able to provide some funds for the project in the next few months.

“I’m very excited about the prospects of the preserve, and it’s important to provide beautiful, natural open spaces for hiking in the South County, where those spaces are limited,” Hill told New Times.

If successfully completed, the Pismo Preserve project would establish a starkly different land-use strategy than that of its next-door neighbors: the proposed Spanish Springs and Pismo Ranch developments. Those controversial developments are just a stone’s throw across Price Canyon Road from the proposed preserve.

“Considering just a few short years ago these 868 acres were presented to LAFCO in a sphere of influence request by the city of Pismo Beach—as a development opportunity—it makes this preserve an even more wonderful gift from the Land Conservancy,” said Marcia Guthrie, a member of local activist group Save Price Canyon.

Currently, the 868 acres include more than 10 miles of existing roads and trails, which would be open to hiking, biking, and horseback riding. The land is a mixture of hilly grasslands, oak woodlands, and riparian corridors.

Save Price Canyon member Sheila Blake, whose property in Pismo Heights directly abuts the preserve, said she was thrilled to hear that the property was being sold to the Land Conservancy. Blake considers the plan a victory for those who oppose massive development in the area.

“Since the city is experiencing a renaissance with renovation of the downtown and acquisition of the Chapman House, their next project should be saving Price Canyon from unwanted development,” Blake said.

If all goes well, Dettman said the preserve could be open to the public as soon as spring 2015.

Interested in learning more about the Pismo Preserve or donations? Visit lcslo.org.