A group of Pismo Beach residents opposed to a neighboring housing development are accusing City Councilmember and California Coastal Commissioner Erik Howell of being swayed by a hefty campaign contribution. 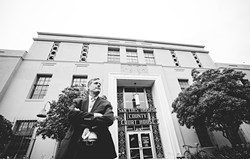 Residents say Howell changed his position on the project two months after he received a contribution for his 2016 City Council re-election campaign from the project’s consultant. That prompted residents Ed Henry, Alan Stocker, Jim Harris, and Marge Harris to file a complaint against Howell with the California Fair Political Practices Commission (FPPC). The complaint claims Howell violated a California government code by voting on a project within one year of receiving a contribution of more than $250 dollars from a project representative and by failing to disclose that contribution.

The project in question is planned for a vacant 3.7-acre lot on North Silver Shoals Road, where Silver Shoals LLC plans to build nine single-family custom homes, 10 townhomes, and a 1-acre park on the bluffs overlooking the ocean.

The Pismo Beach City Council approved the project 4-1 in September 2014. Howell was the lone “no” vote to the project and raised concerns about the project’s impacts and inconsistencies with the city’s local coastal plan, a framework for coastal development designed in conjunction with the California Coastal Commission.

The group of Pismo residents appealed that decision to the Coastal Commission, where it was heard in January 2015. There, Howell again raised concerns with the project and successfully lobbied the 12-member commission to direct staff to look more closely at the project. It returned to the commission in November, where staff recommended significant modifications.

During that meeting, Howell and six other commissioners disclosed that they had met with several representatives for the project, namely Susan McCabe—owner of the Los Angeles-based consulting company McCabe & Company—who’s known to wield heavy influence on projects before the commission.

Howell joined a voting majority to approve the project with some modifications. Pismo residents filed a legal challenge in January to the commission’s approval.

That contribution is the main bone of contention in the Pismo residents’ complaint.

“After receiving a $1,000 campaign donation from McCabe & Co., however, he completely changed his public comments and position on the project,” the complaint said.

It also asserts that Howell should have recused himself from any and all votes on projects represented by McCabe & Company, including the Silver Shoals project and two other high-profile projects: the construction of a new orca enclosure at Sea World and the Malibu housing cluster proposed by U2 guitarist David “The Edge” Evans.

The complaint also says Howell should have mentioned that contribution during his ex parte disclosures at the November meeting. In addition, it alleges that Howell failed to disclose at least one phone conversation with McCabe, which occurred after she called him on his cellphone during a meeting he was holding with project opponents in October.

Howell has previously declined to comment on the Silver Shoals project or the reasons behind his votes, citing ongoing litigation on the project. Howell briefly discussed the complaint with New Times on March 15, but said he wouldn’t comment on the details until he could review a FPPC-stamped copy. That has since been obtained, but Howell did not return an email or phone request to comment.

Jay Wierenga, FPPC communications director, also declined to comment on the specific complaint. In an email, Wierenga said that it’s both legal and common for people to give contributions to candidates with an expectation attached and that the ethical lines in that situation are “very subjective.”

“That’s why our job at the FPPC is to promote disclosure, so the public has a chance to view the contributions and decisions and make any conclusions they can, should, or desire to make,” he wrote. “Our job is to do our best to make sure proper disclosure is there.”