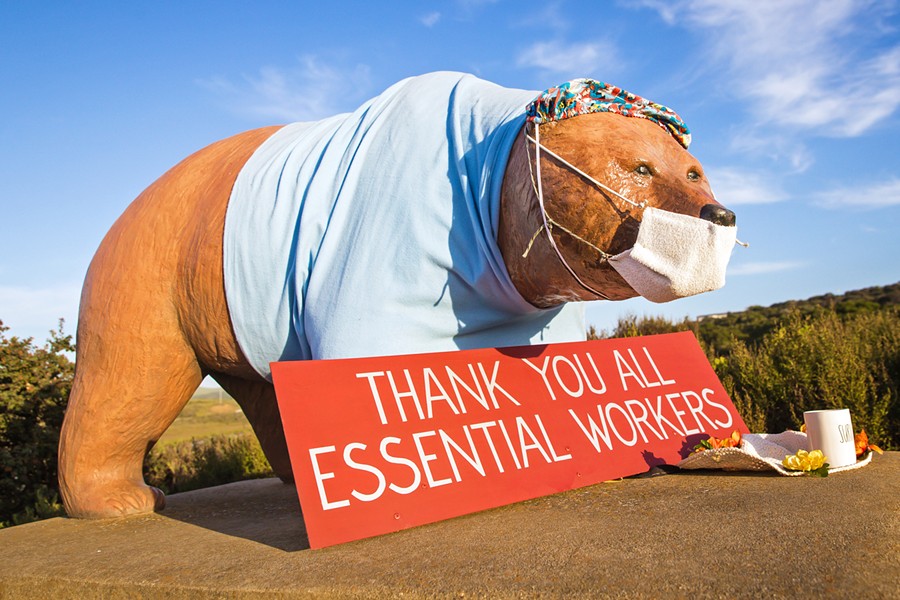 Photo By Jayson Mellom UNMASKED Although even the Los Osos bear statue is wearing a mask these days, an urgency ordinance that would have required workers and customers in Pismo's essential businesses to wear face coverings failed at a City Council meeting on May 5. It will be considered again as a regular ordinance on May 19.

Despite the efforts of a few passionate Pismo Beach City Council members, employees and patrons of Pismo Beach's businesses won't be required to wear face coverings for the time being. But such a mandate could be coming soon.

An urgency ordinance that would have required workers and customers in Pismo's essential businesses to wear face coverings failed at a City Council meeting on May 5, after a lengthy and at times heated conversation about what COVID-19 prevention measures are right for Pismo Beach.

"Pismo Beach, with a population of about 8,000-plus people, is more like a state park than a city," Councilmember Sheila Blake said at the meeting. "On any peak weekend, the city can welcome up to 100,000 visitors, the majority heading the beach, Shell Beach, and most recently, the preserve. To assume that all of these out-of-towners will voluntarily behave responsibly is a fantasy."

Blake was one of a majority City Council members who supported the ordinance, which would have gone into effect at 5 p.m. on May 5 had it passed, as a way to further protect residents and workers in a small town that's prone to large crowds and busy weekends.

"I was on Pomeroy [Street] several times on Saturday to see what was going on, and it was really distressing to see people completely, completely disregarding social separations," Blake said at the meeting. "No wearing of masks, no sense of policing themselves. It's pretty bad. So I really think that we need this ordinance."

Although a majority of council members agreed and voted in favor of the ordinance, urgency ordinances need a four-fifths majority to pass. With Mayor Ed Waage and Councilmember Mary Ann Reiss in opposition, the ordinance failed. Instead, City Council voted to scratch the "urgency" language and consider the matter as a regular ordinance at a later date, which Reiss supported and Waage again opposed.

For Waage, it came down to issues of consistency.

SLO County Public Health doesn't recommend requiring face coverings at all times, but the county's reopening plan does include some of its own guidelines on face coverings in public spaces. Those vary from the requirements proposed in Pismo. Waage said it could be confusing for business owners to navigate both and he'd rather follow Public Health's lead.

Councilmember Reiss was also worried about being too hard on already struggling businesses, which would have been required to provide their employees with face coverings and deny business to any customers without. Businesses out of compliance would have been penalized with an administrative citation.

Too much responsibility would have been put on business owners with too little warning, Reiss said. Although City Council heard from more than a dozen residents on the matter, Reiss told New Times that few public comments came from actual business owners, who she said weren't given adequate notice regarding the proposal.

Though Reiss said she believes in masks and wears one whenever she's out, she'd like to give Pismo's business owners time to read through the ordinance and decide how they feel about it. So while Reiss voted against the urgency ordinance, she supported a motion to consider the ordinance again as a regular ordinance, which will require a second reading, and if approved, would go into effect 30 days after.

A second reading is scheduled for May 19, and Reiss said that's soon enough to make a difference.

"So at least this gives them a chance to come and talk to us," Reiss told New Times. Δ