The dark times for one of Pismo Beach’s premier hotels appear to be turning even darker. 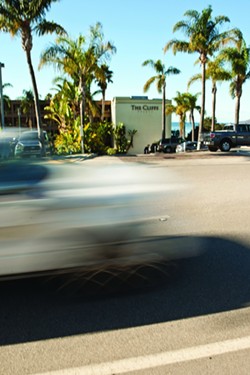 On Nov. 18, the California Joint Powers Insurance Authority (JPIA)—the largest municipal self-insurance pool in the state and Pismo’s insurer—filed a lawsuit against the Cliffs Resort, seeking general damages, special damages, and attorney’s fees on top of a refund—with interest—of the $1.5 million settlement the JPIA paid out on Oct. 24.

This litigious maelstrom has been whirling ever since Tricia Rittger—a Los Osos resident and KSBY employee—was struck and killed by a car while crossing Shell Beach Road outside the entrance to the Cliffs on Nov. 19, 2011.

Working on behalf of Rittger’s husband and daughter, attorney Ryan Harris has already reached settlements with the driver of the vehicle and the city of Pismo Beach (through the JPIA), but he’s also aggressively pursuing a lawsuit against the Cliffs.

Both Harris and the JPIA are suing the Cliffs for allegedly violating a 1983 conditional use permit [CUP].

That permit explicitly forbids public and guest use of the east lot on the opposite side of Shell Beach Road from the Cliffs. Walking to the Cliffs from the east lot necessitates crossing the 40 miles-per-hour road at a juncture that lacks a crosswalk, signing, or proper lighting—which is how Rittger was killed.

“The [JPIA] filing suit against the Cliffs is a demonstration that the Cliffs was irresponsible in the way it used its property and specifically violated the CUP,” Harris told New Times. “That irresponsibility resulted in a dangerous situation and unfortunately cost Mrs. Rittger her life.”

The lawsuit filed by California JPIA attorney Clayton U. Hall is even more blunt.

“Defendants’ failure to comply with the requirements of [the CUP] resulted in the death of Tricia Rittger,” the lawsuit reads.

Attached to the lawsuit were two letters from Hall to the Cliffs’ attorney—Darren W. Epps—requesting that the Cliffs take over the defense and indemnity of the city in the Rittger matter, as they, not the city, were in direct violation of the CUP.

In the second letter, dated May 24, 2013, Hall warns, “If the Cliffs does not take over the defense and indemnity of the City in this action, the City will be obligated to proceed with direct litigation arising out of the failure to comply with the CUP.”

Such a transfer of defense and indemnity never materialized, and the Cliffs Resort was thus hit with their second major lawsuit in the past few months.

Pismo Beach City Attorney Dave Fleishman said the JPIA had the final say about whether or not to file suit; he declined to comment about the nature of the city’s involvement with the decision.

“The Rittger lawsuit, for the city, is a closed case now,” Fleishman said, adding that the Cliffs Resort remained a “valued member of our business community.”

Representatives of the Cliffs Resort—general manager Mike Casola and owner John King—did not respond to New Times’ request for comment as of press time.

Harris said the Rittger family looks forward to their day in court, roughly scheduled for the summer of 2014.