Brown's office and Howell both confirmed the appointment to New Times. 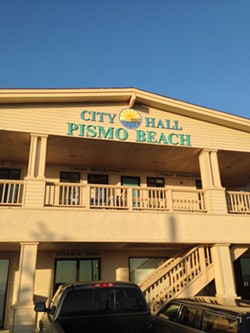 The commission's South Central Coast seat, which had been held by former Ventura City Councilman Brian Brennan since April 2011, must be held by an elected official from San Luis Obispo, Santa Barbara, or Ventura counties. Brennan chose not to run for re-election on his City Council in November 2013, putting the seat up for grabs.

The last SLO County politician to serve on the Coastal Commission before Howell's appointment was Pismo Beach City Councilwoman Mary Ann Reiss. Reiss held the South Central Coast seat for a brief two months in early 2011 before she was dismissed by Gov. Jerry Brown. Reiss had been nominated by former Republican Gov. Arnold Schwarzenegger in the waning days of his administration.

Aside from Howell, there were four nominees for the seat.

Ramirez and Howell were the only candidates to receive nominations from multiple counties.

Brown's office announced their appointment of Howell one day before the 30-day appointment period was set to expire.

Howell will be sworn in during the Coastal Commission's March 12 meeting in Long Beach.