Jeff and Laura Ambrose lovingly call the Woodstock's in San Luis Obispo "the mothership." They have been co-owners of Woodstock's Pizza since 2001, owning all seven California locations. San Luis Obispo was the second Woodstock's ever and the first in the state, giving it a special place in the company. It's a store they see deserving of a makeover—a "well over" $1 million makeover. 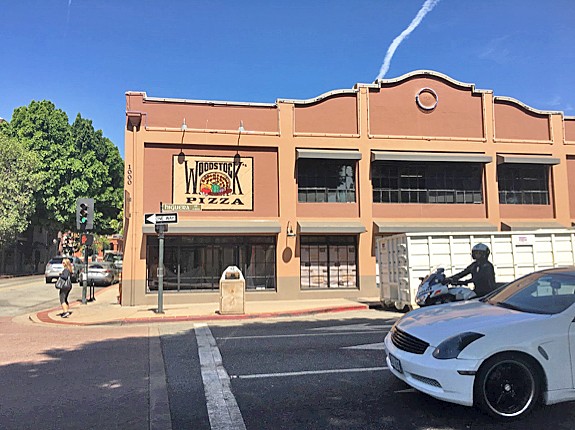 "You can only repaint so many times," Laura Ambrose said. "This is an old historic building and honestly needed to be gutted. Things were kinda falling apart all around us and it was time to do something."

Jeff and Laura have been looking at the empty space next to Woodstock's for years, waiting for inspiration to expand. Around 2 1/2 years ago, with the combination of a restaurant in need of major renovation and a space next door that felt "like a black hole," they decided to get to work on "Woodstock's 3.0."

The updated Woodstock's, which will have a soft opening mid-September and a grand opening party toward the end of September, will be roughly 7,600 square feet, making it the largest Woodstock's yet. The originally empty space has been converted into a "backyard." The walls mimic what you might see sitting in your own backyard—a barn, a Volkswagen, Bishop Peak.

Laura and Jeff have been very particular about creating this space; during the process, they ended up firing two designers who couldn't understand the vision they were after. It has a different feeling than the Woodstock's locals have come to know. Guests will have the option to buy buckets of beer on ice and rent out the entire space or portions of the space. It's meant to be a party.

New Woodstock's shirts carry a slogan that sums up the space: "Pizza in the front, party in the back." While the backyard is meant to be more lively, the front portion of Woodstock's will remain a more traditional restaurant. However, it is also undergoing major renovations.

"We're not throwing away our old-school Woodstock's look," Laura said. "It will have a different feel, but you're not going to come in and say, 'Oh my gosh, it's not Woodstock's.' You're hopefully going to say, 'Oh—it's a cooler Woodstock's, a more fun Woodstock's.'"

Jeff said he wants to keep the renovated front half of the restaurant a bit "under wraps" so the community is surprised when Woodstock's reopens, but he let New Times take a look at the construction site. Expect to see a large bar area centrally located, a new kitchen, some outside seating, and more layout changes. The space is being rebuilt from the ground up.

While the drink selection is expanded and gelato is being added for dessert, Woodstock's iconic pizza is the only thing in the building that remains untouched.

With room for nearly 360 guests total, Jeff and Laura hope to host even more events in addition to their classic shindigs like Trivia Night. Even on non-themed nights, games like corn hole, giant Jenga, and giant beer pong will be available for guests. The renovation has been time consuming for Jeff and Laura, but they claim that they're starting to see "the light at the end of the tunnel."

"Since SLO was our first location in California, there's this need and desire to make it even better," Jeff said. "San Luis Obispo is a great community for us, and we want this to be our model store."

The Arroyo Grande Rotary Club (AG Rotary) has given Old Juan's Cantina in Oceano its Make a Difference Award for the restaurant's service to South County's homeless population. The Make a Difference Award is given to those who exemplify the Rotary motto "Service Above Self." Brother-and-sister owners Eva and Adam Verdin have provided many free meals for South County's homeless through AG Rotary's Homeless Luncheon Program. Δ