'Plagues of SLO' descend, but are fixed 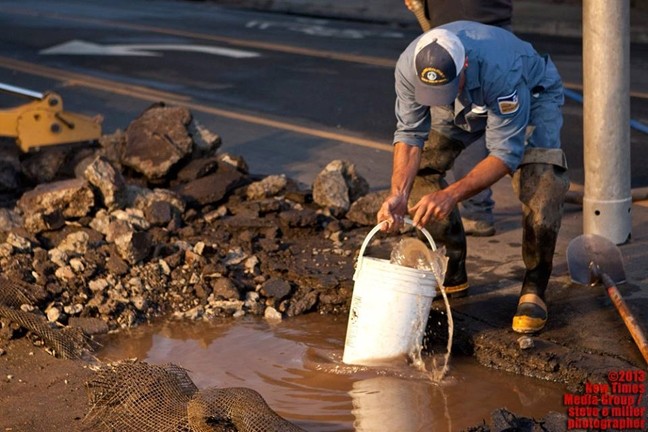 There was no storm cloud of locusts and the frogs and pestilence remained at bay, but this past week saw a pair of events that were as close as San Luis Obispo will likely ever get to Biblical Egypt.

On the afternoon of Sept. 21, a water main on Monterey Street ruptured, causing water to pour out for hours. The break, which closed a one-block stretch of Monterey between California Boulevard and Pepper Street, was reported to the SLOPD around 4:30 p.m., and the water pressure was turned down a few hours later.

All told, a public works crew worked on digging out the cracked pipe, finding the break, and replacing the pipe for roughly 10 hours before regular service was restored at around 2:30 a.m. on Sept. 22.

The rupture affected retail outlets along a three-block stretch of Monterey Street, with many closing shortly after the water started bubbling up.

Just a few days later—early in the morning on Sept. 23—at least three workers in full-body protective suits and ventilation masks were hard at work removing toxic materials from the basement of the Bath and Body Works store at the corner of Chorro and Higuera streets. 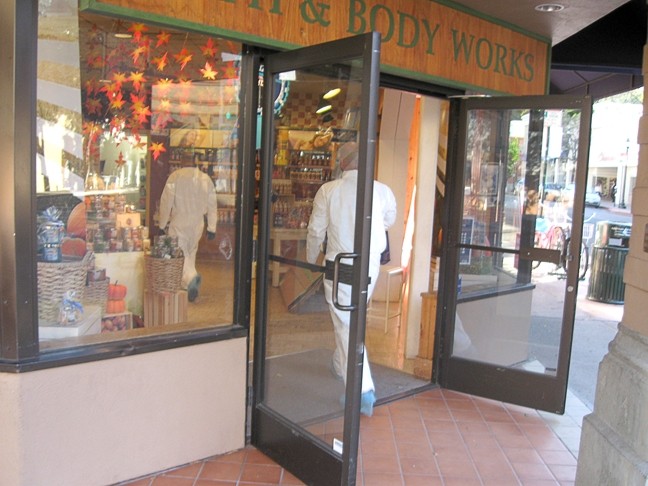 A Bath and Body Works employee, who asked not to be identified, said mouse droppings—which are considered to be toxic—were recently discovered in the store’s basement, but that the store’s showroom was unaffected.

Workers from a local branch of 1-800-Got-Junk?—a Vancouver-based junk removal service—filled up an entire large truck with contaminated items from the store’s basement. Workers confirmed the presence of mouse droppings, which can carry harmful bacteria and viruses, but said they were able to successfully clean out the basement.