There are seeds for 170 different plants sitting in the Nipomo branch of the San Luis Obispo County Library system right now. And that collection—1,700 seed packets full—is only going to grow.

The seeds will literally grow into plants if the 22 currently registered members of the San Luis Obispo County Seed Library drop them into soil, water them, and care for them. And the collection will literally grow if people donate more seeds and if seed library borrowers refurbish the seed supply. 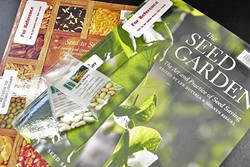 That last part: “That’s a goal not a requirement; there are no fines involved for people that don’t bring back seeds,” Nipomo Branch Manager Kim Pendleton said.

The pilot program—a collaboration between the county library system and SLO SeedSavers—opened to the public at the end of April, and Pendleton said 60 seed packets have been checked out so far.

Once you’re a card-carrying SLO County Library member, you can register for the seed library and make a request for seeds. Basically, you register, pick your favorites, take them home, and after the plants have gone to seed, harvest those little suckers, and bring them back to the library.

He said the whole idea is gaining popularity in the U.S. at the moment.

“People are interested in saving the seeds that we have because apparently the number of seeds we have worldwide is declining,” Pendleton said.

According to the International Seed Saving Institute: In 1900, food for the planet’s population was provided by as many as 1,500 plants, whereas today, 90 percent of the world’s nutrition is provided by 30 different plants.

In Nipomo, you can now find seeds for things like corn, pole beans, eggplants, hollyhocks, herbs, and even cotton. There are native plant seeds (which the library is looking for more of) and 20 different varieties of tomatoes. Each bag or packet of categorized seeds stored in the catalog is full of summer lovers. As summer harvest comes to a close, those seeds will be swapped out for fall growers. And then for winter. And then for spring. The idea is to encourage diversity in what’s being planted and when it’s being planted. Members are allowed to check out up to 10 seed packets per growing season.

For all you non-green thumbs out there, don’t worry. Instructions, classes, and information are definitely a part of the whole seed library package. In fact, bringing new gardeners into the fold is one of the big ideas behind it. Pendleton said while saving seeds to bring back and add to the collection is definitely the point of the new seed library, “we also wanted to encourage the people who aren’t already growing things to grow things.”

On May 14 in Nipomo, Timothy Hollingsworth presented tips for getting started with seeds in your garden, and Elizabeth Johnson of SLO SeedSavers demonstrated the basics of seed saving.

For Johnson and the SeedSavers, housing the seed library in a physical building is a big deal. She said the organization piloted a sort of mobile seed unit last year that made appearances at places like farmers’ markets. And SeedSavers has done an annual seed exchange since 2007, but the library’s goal is to open it up to everyone.

“It really took a librarian’s mind to organize it and make it accessible,” she said, adding that the organization is also growing a demonstration seed garden at the Grange Hall in San Luis Obispo.

Find out more by calling the library at 929-3994 or emailing Pendleton at kpendleton@slolibrary.org. Find SLO SeedSavers at facebook.com/sloseedexchange.

• A solar-powered boat designed by middle school students at San Luis Obispo Classical Academy took home the first place trophy for the slalom race at the Northern California Solar Regatta over the weekend of May 13 and 14. The team took third overall out of 20 competing schools (15 were high schools) and was made up of students ranging from fifth to eighth grade who built the boat from scratch under the guidance of boat builder and restorer Chris deFirmian.