The Garden Street Terraces project gets a public unveiling 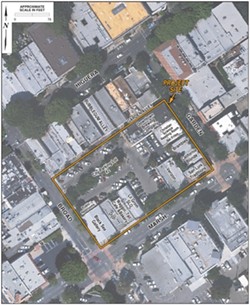 # Coinciding with the timing of the release of a draft environmental impact report that raises concerns about the future of existing historical buildings, the project's 74-foot top height, and the effect on the city's character, Hamish Marshall launched a public push for SLO's proposed Garden Street Terraces project during the last week in February.

The openness seems intentional. In his talks with reporters, Marshall has been keen to make sure that his project, which is to be financed in part with a unique arrangement with the city, isn't lumped into the same discussion as the Copeland family's Chinatown project.

Allan Cooper, a Cal Poly architect and member of the downtown aesthetic watchdog group Save Our Downtown, got a preview of a model of the project during a morning display at Mother's Tavern on Feb. 26. Media were to get a walkthrough on Feb. 27.

Though Cooper and his group have been skeptical about the project, he came away at least somewhat pleased, saying certain changes from earlier designs--a wider sidewalk along Garden Street, the addition of a public viewing deck and a public plaza, and a stepped transition between the taller parts of the structure and smaller surrounding buildings--are improvements.

# Still, he and other group members have their concerns, some of which are echoed in the draft environmental report, now available on the city's website or at the planning department office. Among the concerns are that the height of the building will cast shadows, particularly onto Garden Street that some older structures, including those now housing Traditions and the Christian Science Reading Room, will exist as facades only and other buildings will be demolished or relocated. Cooper is also concerned that Garden Alley doesn't appear in the model to be pedestrian-friendly, geared rather toward trash cans and service entries.

Marshall didn't return a call asking for comment, and his public relations contact said that the architect would be unavailable, at least until the scheduled media morning.

Here, based on the EIR, interviews, and public documents, is the skinny on Garden Street Terraces.

(Pitch) The city wants to make better use of its surface-level parking spots and is keen on seeing more shops, hotels, and condos downtown, to avoid sprawl, generate taxes, and "revitalize" downtown.

(Problems) The city's financing deal is atypical, 22 public parking spots would be lost, and the project would be the just one foot shy of a 75-foot limit.

(Plan) The plan has a 64-foot average height and its tallest point is 74 feet.

(Pitch) The design is aimed at stepping back the height and only a small portion reaches the peak height, which is allowed under new city regulations.

(Problems) The scale could dominate surrounding smaller buildings and cast shadows across the street.

(Plan) Several buildings on the city's Master or Contributing List of historic structures would be demolished, relocated, or significantly altered

(Problems) The EIR calls this a Class I impact, which can't be fully fixed. Critics say it will diminish the city's much-touted charm.

(Plan) The project will cover 1.2 acres with more than 188,000 square feet of construction.

(Pitch) Visually, the project will look like a series of smaller buildings. The area is underdeveloped compared to surrounding parts of downtown.

(Problems) The threats to the city's "Aesthetics and Visual Resources" is a Class I impact, with the report noting it will eliminate many of the historic and visual elements that contribute to the city's history and character.