Agriculture plays a huge role in feeding the growing world and contributing to the changing economy. For Cuesta College professor Amy Stapp, the greater impact that agriculture has on the world has influenced her life and she now works to teach that idea to her students. She is also one of the many professors helping to create an agriculture community on Cuesta's campuses with new courses, a degree, a plant facility, and a collegiate club. 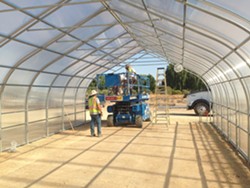 Stapp grew up in the San Joaquin Valley and was immersed in the family business, dairy processing. She later held a marketing position for Foster Farms in Livingston, California, where she covered the fresh chicken department.

But being in charge of the brand didn't limit her from connecting with and learning about the other departments at Foster Farms' headquarters. She was able to dip into the sales, operations, purchasing, and finance departments.

All of these departments work together to bring a product to the tables of many homes. That network has really stayed with Stapp, and it's something that she instills in her students. Within Cuesta's agriculture business program, Stapp teaches an intro to business course that looks into the different pieces and parts that make up a business.

"When I teach my class, we talk about that reality that agriculture feeds the world and how much is going on in terms of innovation," she said. "Some students really connect with that idea and feel really purposeful in their studies."

The agriculture business program is relatively new to the college. Stapp said it's 2 years old with about 237 students declaring ag as their major.

"We developed this program really recognizing the nature of this community and the high school programs that are very rich in agriculture," she said.

The program is expanding for the fall 2017-18 semester with a new associate degree in plant and science and a certificate in agriculture mechanics. The degree is for students who are interested in ag and want to go the science route, whether it be horticulture or veterinary. The mechanics certification enables students to excel in the operation of machinery used in the trade, opening the doors for later courses in industrial power.

Cuesta's North County campus is constructing a new plant facility that includes a green house, and it's nearing completion. There, students will be able to take a lecture and lab course that deals with the ins and outs of plants and the soils that help them grow.

The college's students will also be able to take some of the courses associated with the plant and science degree, such as the new soils and plants class, as part of their general education.

"You don't have to be an ag student to be able to get your hands dirty and grow some plants, understand the makeup of different soils, and what it takes to grow things," Stapp said.

Kourtney Russel, a current student at Cuesta with a declared major in ag business, is the current president of CFFA. She's seen the agriculture program flourish for the college and believes that starting an FFA chapter has helped the program grow. Members get together to talk about current events within the broader ag community, what they can do to give back, and listen to guest speakers who come in as well.

"I think a lot of people are excited because it builds an ag community on campus and it's great for networking," Russel said.

Being a member of the chapter can give the students a leg up on meeting industry leaders and attending association mixers. Russel said that last year students were able to attend the Cattle Women's Association mixer.