Where's it showing? There Does Not Exist Brewery in SLO; tickets at slomotionfilm.com 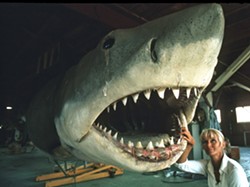 Writer-director Sally Aitken (Warrior Empire: The Mughals of India, Getting Frank Gehry) directs this 2021 National Geographic film about pioneering scuba diver Valerie Taylor, who went from famous female spearfishing champion to advocate for sharks. Thanks to SLO Motion Film, the biopic will be screened as a benefit for the Central Coast State Parks Association on June 12.

The documentary benefits from a trove of fantastic archival footage. Taylor is extremely famous in her native Australia, and her early career as a spearfisher was well chronicled. This early footage is amazing—almost as amazing a Taylor's life story, which we hear from her own mouth in contemporary interviews. She was a brave and beautiful young woman, which made her a star. Her conscience made her a hero.

The inspiring story is one of personal growth and ecological revelation about the importance and beauty of all sea life, including sharks. She—perhaps more than any other diver—helped demystify sharks and demonstrate that they're not the mindless killing machines they've been made out to be. It's a remarkable piece of filmmaking and a wonderful tribute to a pioneering woman. (95 min.) Δ