Plein air for a purpose

New Times What is the San Luis Outdoor Painters Association for the Environment (SLOPE)?

Laurel Sherrie The first paint out was in 1993 and today we have 15 professional artists ... the number fluctuates up and down depending on who retires and so on. We meet once per year, and have a group meeting. It’s a very loose group. I am president.

New Times How did the lighthouse project come about?

Sherrie Groups or people that are doing something wonderful with a natural environment, ask us if we would put on a show for them. They want to preserve the wild and ranch lands we have, and they want to raise money, so one way to do that is to have a show with us, because we donate 40 percent of sales to that place. The lighthouse is one of the very few Victorian type buildings (lighthouses) left. They are restoring it back to its 1890 condition. SLOPE’s next show in 2009 is going to be in the Octagon Barn for the Land Conservancy; 2010 is at the Chimineas Ranch near the Carizzo Plain.

New Times Do you do just one paint out each year?

Sherrie Yes. The Lighthouse Keepers approached us a few years ago [events are planned years in advance]. We have been going out to the lighthouse to paint since last June.

New Times How many times did you go out to the lighthouse to paint?

New Times What types of images came from those painting excursions?

Sherrie Lots of the lighthouse, but also of the surrounding area. I did a painting of the kitchen [pictured]. I was intrigued with the kitchen because of its wood floors and the windows, which are fogged up from so many years of ocean mist. The sun was streaming through putting this light onto this old wooden table and chairs, and the floor. We had full access to the lighthouse, even up to the tower with a harrowing tiny stairway with steep steps, and that leads you around the walkway around the light.

New Times Tell me about what that experience is like, being out there.

Sherrie The lighthouse keepers pick us up at Fat Cats in a van—either in the morning or afternoon depending on the light ; we paint for 3 to 4 hours at a time, sometimes longer. Sometimes we stayed until the late afternoon because we just had to see the sunset. It’s very wild out there and windy. Painting in the wind ... ya know? But you don’t feel like you’re connected to the mainland. It’s so disconnected, so out there, and it’s up on a cliff, on a bluff. When you are standing there painting and the pelicans are flying below you next to the cliff, it’s awesome. 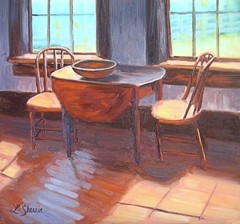 KEEPING UP WITH THE JONES’

The Lighthouse Impressions art show and sale takes place Sept. 21 from 1-4:30 p.m. at the Avila Beach Golf Resort. The art exhibited, which includes watercolors, oils, acrylics, and pastels, was created by the San Luis Outdoor Painters Association for the Environment (SLOPE) and represents the famed and mysterious Point San Luis Lighthouse. [check this]$25. “Simpler Times” is a painting of the kitchen in the lighthouse done by artist Laurel Sherrie. Info on the event and becoming a sponsor: 546-4904, 540-5771 or www.sanluislighthouse.org.

Christy Heron wants to hike to the lighthouse. Join her at cheron@newtimesslo.com.