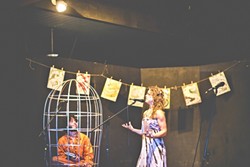 Editor’s Note: Some people remember certain events—specifically the part at the end about manhandling Denz—differently. Read with a grain of salt.

On June 4, I get a message from local poet and purveyor of all things artsy and esoteric, Denz Ray Falcon-Powell Junyor, asking if I might want to participate in Lucha Libro, which is like Mexican wrestling, but with words.

“It’s a creative writing ‘dual’ that occurs on stage, so you would essentially be given a creative prompt and from a laptop that digitally projects the word processor on screen onto a larger wall screen so the audience can view [it]. The two writers write at the same time and then one gets voted to the next round by a few judges—kind of like American Idol, but for writers,” Denz Ray explains.

I must have been drunk or something because I say yes. “Get back to me with the details. I’m putting it on my calendar,” I write. Seriously. It’s right there in my message thread.

So now it’s Thursday, June 26, and I haven’t heard squat since Denz Ray’s first query. So, I message him: “Am I supposed to show up tonight?”

“Hey! Yeah, tonight we are going to have round one of Lucha Libro. You’ll have five minutes to write a piece. The event starts at 7 p.m., but we won’t start our 30-minute debacle until after 8:30 p.m. Thanks man!!!”

“Nah, we don’t have anything like that,” he tells me.

No beer? I thought this was a writing competition. My heroes are Ernest Hemingway, Norman Mailer, Charles Bukowski—guys who drink, and fight, and write manly prose about getting your left nut shot off by shrapnel, or putting a dude to death by firing squad, or fighting an asshole/bartender in the back alley behind a seedy dive bar.

Naturally pre-gaming is in order, not to mention parking lot drinking. When my wife and I show up around 8:20 p.m., Leslie St. John is on stage, and I can’t help but feel déjà-vu because every time I accidentally wander into a poetry reading, Leslie St. John is on stage. Up there with her, in an orange jumpsuit and in a metal cage, is Denz Ray. There’s also a blindfolded and handcuffed woman near the stage with a bare midriff and a dude drawing on her. Did I just walk into the party scene from Beyond the Valley of the Dolls? 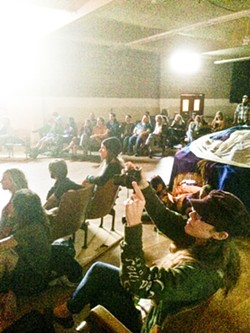 After Leslie, Denz Ray calls another poet up to stage. Then another. Hmm. I guess we’re next after this dude, I think, looking at a stage with no desks, no laptops, and no wall screens. Suspicion is mounting. Somebody needs to work on his organization skills!

I see managing editor Ashley Schwellenbach, who gave Denz Ray the Lucha Libro idea after seeing it during a trip to Peru, and photographer Henry Bruington. And, since I’m sure one more beer and maybe a pull or two off an ass pocket of whiskey will help me reach my creative peak, we all gather ’round the trunk of my car and class up the Grange Hall parking lot.

When I head back in, Vincent Bernardy is setting up on stage with a violin player. Hmm. I guess we’re on after him. I dig Vincent’s music, so I catch his set and see my pal Timo Beckwith and say, “Hello.” Then, after Vincent, Denz Ray announces another musical act. What the hell? It’s after 9:30 p.m.! I’m out of beer because Henry, who just turned 21, drank them all!

I storm the stage and reach between the metal bars, scrambling to grab Denz Ray’s orange lapels, demanding to know what’s taking so damn long!

“My creative window is closing!” I slur, staring into the abject fear-saucers that his eyes have become, as he squeezes himself against the back of the cage, just out of my grasp!

I snatch the microphone from him and recite the only poem I can remember, Philip Larkin’s “This Be The Verse”: They fuck you up, your mum and dad. They may not mean to, but they do. They fill you with the faults they had and add some extra, just for you. But they were fucked up in their turn by fools in old-style hats and coats, who half the time were soppy-stern and half at one another’s throats. Man hands on misery to man. It deepens like a coastal shelf. Get out as early as you can, and don’t have any kids yourself.

Then I yell, “Timo Beckwith is my second! I’m out of here!” I shove the microphone into Denz Ray’s quaking hands, give him one last death glare, turn on my heel, grab my hot wife, and walk out into the real world, where there’s beer for the drinking and an adherence to simple timekeeping, dammit!