A local artist and teacher hosts a farewell exhibit

When it comes to American cuisine, most people think of Julia Child as the mother of modern cooking in America, and she earned the respect of her peers for inspiring people to get back into their kitchens. However, the credit for America's culinary transformation goes to her longtime friend and confidant James Beard (1903-1985), who was first dubbed "the father of American

# cooking." His easy-to-follow cookbooks inspired Americans to bypass the frozen Salisbury steak dinner tray and canned peas to "make foods from scratch." Using modern equipment affordable for every budget, he taught us how simple it is to make fresh mayonnaise, spinach pasta, and apple pie.

Born in Portland, Ore., Beard grew up helping his mother run the Gladstone Hotel. After moving to London in the 1930s, he began catering and wrote his first cookbook, Hors d'Oeuvres & Canapes. Beard went on to become a syndicated food columnist who frequently appeared on television and radio, and advised food producers and chefs. He wrote nearly two dozen cookbooks and in later years established a cooking school in his Greenwich Village home. Thanks to Julia Child, his townhouse became America's first culinary center: The James Beard Foundation (JBF), which honors the world's greatest chefs, restaurateurs, journalists, and cookbook authors, as well as emerging chefs.

The mission of that culinary showcase is the preservation, nurturing, and celebration of American gastronomy. But until last year, no chef on the Central Coast had contacted the James Beard Foundation to hold one of its fundraisers here. With the opening of Lido at Dolphin Bay Resort in fall of 2006, however, executive chef Evan Treadwell established the first Friends of James Beard Benefit.

"After working for four James Beard award-winning chefs--Nancy Oakes, Joyce Goldstein, Jeremiah Tower, and Gary Danko--it was only natural want to bring the Central Coast into the spotlight of the James Beard Foundation," Treadwell said. 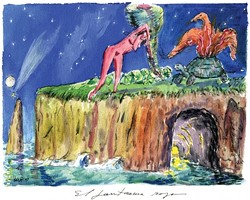 # The first dinner sold out fast and was well attended by local epicureans who enjoyed a 10-course extravaganza paired with varietals from many of SLO County's finest wineries. Even the local vintners who contributed their wines paid the cost of admission to support the benefactor. The dinner party is now an annual event at Lido, and this year it takes place on Sunday, Nov. 11. Because it was so successful and many people asked for more, the benefit dinner has been expanded to include three days of epicurean experiences. In fact, among the additions are two hands-on cooking classes in Dolphin Bay's luxurious penthouse with a fully equipped kitchen that would satisfy the most demanding chef.

At Lido, Treadwell always cites his creative team, including sous chef Brian Collins, formerly at Alice Waters' Chez Panisse in Berkeley and pastry chef Benji Puga, who was among the opening team at Novo in SLO. They've created a sumptuous dinner combined with great local wines that no foodie would dream of missing. Unfortunately, most students will need Mom and Dad to pick up the bill at $200 per person for reservations. But there's a reason for the whopping tab: Proceeds from the weekend events benefit JBF and Cal Poly's Sustainable Agriculture Resource Consortium, as they did during the inaugural dinner last year. It's a great way to support local agriculture (and brag about how good we've got it around here). Besides, when you've got James Beard's name attached to a dinner party like this one, the chefs know they had better get it right.

Friday at sunset, they're kicking off the festivities with a Champagne and caviar tasting with samples from around the world while a Calypso band entertains guests. Among the grand cuvees, guests will sample Perrier Jouet, Charles Heidsieck, Schramsberg, and bubblies from Italy, Germany, New Zealand, Australia, Sonoma, and Napa. The selections of premium caviar are equally varied in origin.

Whether you're an amateur cook or a former pro like me, it's always fun to take a cooking lesson, especially when it's with an outstanding chef like Treadwell. Saturday morning he'll conduct an interactive cooking demonstration of his signature appetizer: mushroom-stuffed quail with polenta. A natural teacher, he's taught such classes over two decades. 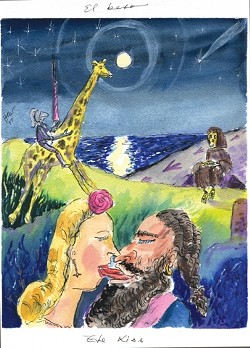 # "My guests will work side-by-side with me," Treadwell said. "I'll help them with knife skills and other cooking techniques you don't usually find in cookbooks."

That afternoon, pastry chef Benji Puga will teach dessert lovers the art of preparing his decadent caramel apple almond tart, also using the penthouse kitchen. With hands-on classes like these, which are so much more fun than just watching a chef prepare the dish, you'll walk away a better cook and take home the recipe and a Lido apron. When the dishes the guests create are finished, they'll enjoy their creations paired with a wine considered perfect for it. These classes are priced at $150 and $75, respectively. It's nothing less than James Beard would've done for his devoted followers.

Hern·n Castellano GirÛn's watercolors will be displayed at Art SPACE Obispo Oct. 29 through Nov. 2. He will attend an artist's reception on Nov. 2, during Art After Dark, from 6 to 9 p.m. For more information about Castellano GirÛn, visit www.hernancastellanogiron.com/index_flash.htm.