San Luis Obispo Police Detective Victor Nunez set up the paper target on a plastic chair, handed me a canary yellow Taser, and gave the signal: "Fire away."

As the fishhook-like prongs deployed, I felt a definite kick--a good one, like I was shooting a fireball out of my hand just like Ken or Ryu in the videogame Street Fighter II.

Then the prongs hit the target.

"Pop! Crackle! Sizzle! Snap!" The arc from the device's 50,000 volts made a sound like a big, unhappy bowl of Rice Krispies. The 26-year SLOPD veteran smiled. His thin mustache perked.

He then proceeded to play an Internet video of cops Tasering a suspect--a huge, tattooed man who was resisting arrest. The officers were small and trying to handcuff him. When the suspect refused to cooperate, they shot him with a Taser. The big man dropped like a bag of flour. We all laughed.

"But with this," he said, motioning toward the Taser, "I don't need to be."

We all stopped laughing.

The Taser is an example of what law-enforcement agents call a "less-lethal" weapon--one that's designed to immobilize or incapacitate subjects without killing them. Probably.

Nunez said that he's happy to have more options beyond bullets and batons when dealing with the bad guys, but witnesses of recent police takedowns are quick to pen fearful letters to newspapers and speak their concerns about potential abuses. 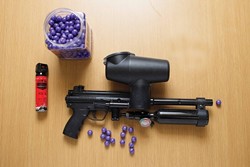 # Paintballs filled with pore-stinging Oleoresin Capsicum, stun guns that paralyze the central nervous system, and beanbag bullets that can bruise internal organs are among the most popular alternative weapons that local law enforcement agencies have recently added to their Batman-like stockpile of equipment.

In theory, these less-lethal weapons cut down on cop-related casualties and make it easier for officers to subdue suspects with less carnage. But "less lethal" isn't "non-lethal," as some watchdog groups have pointed out.

Take Tasers, for example. Electroshock weapons have become the non-lethal weapon of choice for several police forces in SLO County.

The hand-held weapon deploys a two-prong cartridge that can deliver a collapsing 50,000-volt jolt. If that doesn't do the trick, the Taser can be used as a stun gun.

According to Nunez, a person who has been struck by a Taser temporarily loses muscle control, falls down, and becomes powerless to do anything.

"Sometimes people fall on the ground and scream 'Stop it!' But it doesn't have a lasting, residual effect," Nunez said. "Think of it as a muscle cramp. It hurts for a while, but it goes away."

From June 2001 to September 2007, Amnesty International, a worldwide movement of people who campaign for internationally recognized human rights, recorded more than 275 reported deaths of individuals in the United States by conducted electrical weapons, like police Tasers.

Nunez's death statistics differ. He estimates that only a dozen deaths have been verifiably attributed to the use of such devices.

A representative of Taser International didn't return a phone call as of press time, but the company's website describes the technology as a "safer use-of-force alternative" and notes "TASER technology is not risk free, but Independent medical and scientific experts have determined that when used properly, TASER technology is among the most effective use-of-force interventions available to law enforcement."

Whatever the concerns, the SLO Police Department has voted with its budget: It recently purchased 10 new stun guns with built-in video cameras. Nunez said that the department bought the new Tasers to help assure the community that the weapons are being used properly.

The SLO County Sheriff's Department, meanwhile, has chosen not to allow the use of Tasers. They do use other "less-lethal" weapons.

"There's this segment of the population that probably believes that these tools are used whenever we feel like it," San Luis Obispo County Sheriff's Sgt. Aaron Nix said of less-lethal weapons. "The reality is, the use of the weapons is very carefully monitored. Less-lethal weapons have given us a lot of new avenues for dealing with problems. When I first started, 15 years ago, we were pretty much limited to a baton, your hands, or your gun. This has given a great deal of extra options to our people. We've been able to resolve a lot more issues without the use of deadly force."

But resolution of the immediate situation or perceived threat doesn't necessarily mean resolution in the public's eyes.

San Luis Obispo County has recently been witness to practical applications of weapons from officers' less-lethal arsenal. Among recent events that have garnered public attention:

Sheriff's Department officials said that deputies on the scene speculated that the suspect was under the influence of illegal drugs and had an usually high pain threshold. Deputies added that they were concerned he might be brandishing a weapon, even though he was naked.

"You go from the lowest level of voice command all the way up to deadly force," he said. "What we tell our deputies is you are able to use whatever level of force necessary to resolve the issue and to effect an arrest, stop someone from conducting unlawful conduct in your presence, to protect your life, and to protect the life of the public."

On Nov. 16, a multi-million dollar police brutality lawsuit was filed against the San Luis Obispo Police Department by a 52-year-old local pizzeria owner who claims that officers wrongfully abused him in his own living room while investigating a mistaken report that someone had broken in to his house.

A month after he was found not guilty of resisting arrest, Jeffrey Milne and his attorney, Lou Koory, filed a $10-million claim against the San Luis Obispo Police Department, three of its officers, and the city of San Luis Obispo. The claim alleges, among other things, police misconduct, excessive force, assault and battery, and violation of civil rights.

According to the claim, Milne--owner of Babbo's Pizza in San Luis Obispo--was assaulted and injured by three SLOPD officers and one Cal Poly officer inside his own home on the night of July 15. The officers were responding to a call from Milne's neighbor, whose child reported seeing a man kick in the door at Milne's residence.

Milne's and the officers' accounts differ as to exactly who did what, and when, and to what extent when the police arrived. But no one disputes that the 52-year-old was dropped to the floor, pepper sprayed, and generally roughed up--to the point where he sustained visible cuts and bruises.

The claim alleges that Milne suffered multiple injuries--including damage to his right wrist, bruised ribs, neck and lumbar strains, and multiple abrasions and contusions--for which medical treatment was required. He also says that he's currently suffering from headaches and pains that run from his neck, down his arms, and into his hands.

City Attorney Jonathan Lowell said he had received the claim and was investigating it, but couldn't comment further. 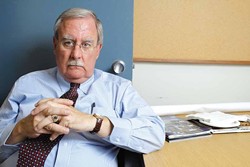 # On Nov. 3, Paso Robles police were videotaped striking, pepper spraying, and Tasering a 44-year-old transient at a city park. Paso Robles Police Chief Lisa Solomon later said that the incident developed the way it did because the suspect wasn't doing what he was told.

"When you have a situation with a person who is resisting arrest, and four police officers are unable to gain [order] with verbal commands, they are allowed to continue escalating force until they overcome the resistance," Solomon said, noting that the response was "completely appropriate in this case."

Some witnesses supported the action, while others questioned whether the officers overreacted, but Solomon said it's easy for people to second guess an incident after the fact.

"Being a police officer is not an easy job," she said. "Making those very quick decisions on your feet, like how to deploy force, and knowing you're going to be Monday morning quarterbacked to death--with the way they are scrutinized, it's a question why anyone would want to be a police officer in today's day and age."

Even with the economy sagging locally, it's clear from any quick flip through the classifieds section that there remains a strong demand for new officers.

# The California Highway Patrol is willing to pay young, semi-smart, and mainly trouble-free folks--people ages 20 to 35 without a felony conviction and with a high school diploma or equivalent--a starting salary of $68,000 a year. Though the plasma-screen-and-Rolex-wearing pay is financially appealing, based on the continuing ads it doesn't appear to be that tempting for the youth of America.

In fact, several local law enforcement departments are severely understaffed. As for training, Paso Robles' Solomon said that new officers do get a solid start. Like a good defensive coordinator, officers review videos to see how they reacted in stressful situations. They practice with firearm simulators and work together to develop strategies to handle the most nerve-wracking and violent scenarios.

If there are legitimate concerns about the use of non-lethal weapons, those concerns are certainly amplified by the YouTube effect--a videotaped beating like the one in Paso Robles is no longer just fodder for one turn on television news. It's now available for viewing by anyone with a computer. The images go viral.

"I think the biggest misconceptions occur when people come in the middle of a situation and don't see an incident from the very beginning and realize the threat a person poses," said the Sheriff's Department's Bryn. "For example, the Rodney King tape was deliberately played over and over again. That eventually led to rioting conditions in Los Angles. When you see the entire tape, you see the escalation of force. I'm not making excuses--you just have to look at any case in the fullness of the situation."

From net guns to sound distraction devices, the manufacturers of less-lethal weapons are coming out with new innovations all the time. They experiment with all sorts of ideas in an effort to build the ideal device.

"It's like building the perfect mousetrap," Sheriff's Sgt. Nix said. "The perfect weapon would be one that you could immobilize a suspect with and safely take them into custody without any lasting damage or injury to himself or any lasting injury or damage to the deputy."

Unfortunately, no such weapon exists.

In physical altercations, staff writer Kai Beech always prefers to use his fists and knees. He can be reached at kbeech@newtimesslo.com.