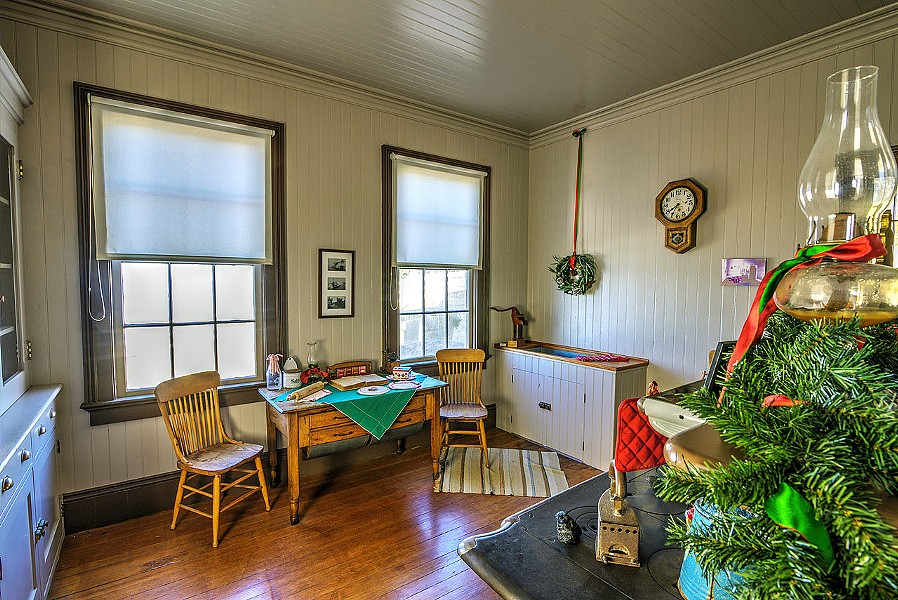 Photos Courtesy Of The Point San Luis Lighthouse Keepers GATHERING PLACE The kitchen, with its old wood stove and hand-pump water faucet, was a hub of activity.

Thanks to GPS, National Oceanic and Atmospheric Administration (NOAA) charts, radar beacons, and other navigational aids, lighthouses are obsolete—relics of bygone era. At one time, however, these were an essential safety feature of nighttime sea travel.

Near Avila Beach, the Point San Luis Lighthouse, completed in 1890, remains largely as it did from its original construction. It's the only surviving West Coast Prairie Victorian model lighthouse remaining in existence, and though the pandemic has closed it from in-person touring, docent-led virtual tours take place at 2 p.m. every Wednesday and Saturday through December.

Kathy Mastako, Point San Luis Light Station volunteer docent, researcher, and writer, explained via email, "The lighthouse has been beautifully decorated for the festive season. Using Zoom, a docent will lead guests on a walking tour of this historic site. Guests will travel back in time to December 1890, delve into the lighthouse's history, and see all the things one would see on an 'in-person' tour, plus more. 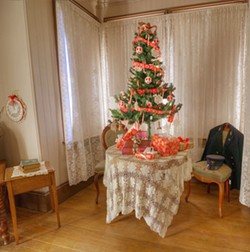 "We'll explore the light station's grounds, visit the head keeper's dwelling, and see all the rooms, which have been decked out for the holidays with old-fashioned ornaments and trim; climb the lighthouse tower to the lantern room with its spectacular views of San Luis Bay; step inside the fog signal room; admire the beautiful Fresnel lens; and see its beacon flashing," Mastako continued.

It's a real step back in time. In-person tours feature a tram ride to the remote location, where you really get a sense of the isolation the lighthouse keeper and his family must have felt.

The story of this particular lighthouse is fascinating in and of itself. By 1870, Port Harford was increasingly busy, averaging 400 ships arriving at the location per year. As early as 1867, President Andrew Johnson's Department of the Interior was exploring the idea of a lighthouse at the location; however, it wasn't until 1886 that Congress passed a bill authorizing funding for its construction. 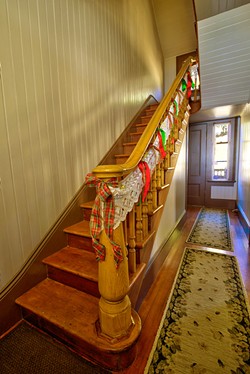 Even then, construction was delayed ... until a near-disaster made clear that the busy port needed a lighthouse. On April 29, 1888, at 2 a.m., The Queen of the Pacific realized it was taking on water and the captain ordered a turn toward Port Harford. The ship hobbled its way through 15 miles of dark seas but had to move slowly for fear of rocks at the harbor's entrance. It sank about 500 feet from the pier in 22 feet of water. Luckily, no one drowned as most of the ship was still above water. If it had a lighthouse to guide it, advocates argued, the ship would probably have made it to the pier.

Completed in 1890, the lighthouse was lit for the first time on June 30, with an added steam whistle becoming operational the following year. Its 4th Order Fresnel lens alternately flashed red and white and could be seen from 17 nautical miles away. The Fresnel lens was eventually replaced by an automated electric light in 1969, and the Coast Guard decommissioned the lighthouse in 1974.

The lighthouse and its accompanying buildings and grounds were given to the Port San Luis Harbor District in 1992 with the understanding that it would remain a historical site for education and use by the public. Indeed, events—including weddings, parties, and concerts—happened regularly at the lighthouse before the pandemic.

"All ticket proceeds go toward operating, maintaining, restoring, and preserving this Central Coast hidden gem," Mastako added, which includes proceeds from the current virtual tours. "Along the way, the docent will talk about how, through the years, the keepers and their families at Point San Luis 'made merry.'"

It might not be quite the same as an in-person tour, but it will probably be warmer watching from the comfort of your computer screen this time of year, and you might just discover that due to the virtual setting, docents will be able to take you to places in-person tours don't go.

Docents can also answer questions along the way.

As Mastako said of the pandemic, "When life hands you lemons, start a lemonade stand." Δ