On Feb. 11, SLO Police officers arrested a man in their years-long investigation into the 2005 homicide of Sharon Ostman. He was arrested moments after getting a GPS tracking device removed from his ankle at a parole office.

The man, Freddie Joe Lewis, is a convicted sex offender who had lived and worked as a cook at the Sunny Acres rehab facility. According to police, he spent most of the time since the incident in jail on a series of parole violations.

"There's no way in God's world that I could know if this man murdered that woman or not," said Sunny Acres owner Dan DeVaul. "But there's one thing I do know: I do know how parole and the city of SLO Police have fucked that man around," in part by luring him to authorities. 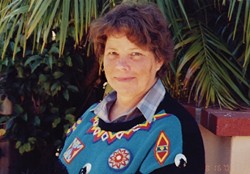 # SLO PD Capt. Ian Parkinson said that police treated the GPS removal as their deadline for completing their case. Lewis was to be arraigned on Feb. 14.

DeVaul said Lewis grew up in SLO and is a former Marine and the son of a preacher who still carries shrapnel from a gunshot wound to the head attained while tracking down AWOL soldiers for the Marines. The state's Megan's Law database lists Lewis as a sex offender convicted of "lewd or lascivious acts with child under 14 years, with force."

Police described the arrest as the result of an "exhaustive investigation" that grew out of physical evidence collected by criminalists from the California Department of Justice on the day Ostman's body was discovered in the creek area below Mission Plaza. Police said a Department of Justice backlog resulted in it taking six months for the state lab to process the physical evidence that linked Lewis to the case.

DeVaul said he tried to attain a private attorney for Lewis, but was stopped by the estimated $25,000 price tag.