San Luis Obispo police were called to an upscale Laguna Lake-area neighborhood on Oct. 3. Police said they received an emergency call at 6:53 a.m. by a man reporting he'd spotted someone with a gun. When police arrived at the Frambuesa Drive home, they said they found an adult man, an adult woman, and a child dead. Two other children were found alive in the home. 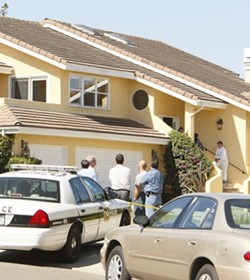 # At the scene as members of the police, District Attorney's office, and coroner worked inside a large contemporary style home Capt. Dan Blanke refused to speculate about what had happened.

But he emphasized that police weren't concerned that a killer was on the run.

"You can draw some of your own conclusions based on that," he said.

Police had not identified the bodies as of press time and would not provide ages for the victims. But Blanke did say the surviving children were "relatively young."

Property records indicate that the home is owned by a local psychiatrist.