The Find Kristin Smart Facebook group lit up on March 15 and 16 with messages of hope and prayers for the Smart family during the SLO County Sheriff's Office's search of Ruben Flores' Arroyo Grande home. 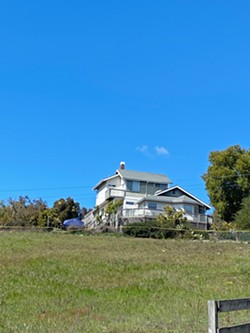 The search warrant was served March 15 as a part of an ongoing investigation into the 1996 dissapearance of Cal Poly student Kristin Smart.

"Prayers for answers and justice!" Sherri Morris said in a post.

Ruben is the father of Paul Flores, who the Sheriff's Office recently named as the "prime suspect" in the case. Flores is reported to be the last person to see Smart alive.

Sheriff's Office spokesperson Tony Cipolla told New Times that Paul was considered a person of interest early on in the case.

"He is still considered a person of interest. But as more evidence has come forward, he has become the prime suspect in this case. [Sheriff Ian Parkinson] began referring to him as a prime suspect last year," Cipolla said.

In a press release, the Sheriff's Office said it had been authorized to use cadaver dogs and ground penetrating radar during the course of the search.

The Sheriff's Office searched the property for two days, and the on-site team packed up the yellow caution tape around the home close to 2 p.m. on March 16.

"As with any active investigation, we will not be commenting on what, if any, evidence has been discovered. No further information will be released at this time," a post on the Sheriff's Office's Facebook page read.

The search warrant is sealed, meaning the Sheriff's Office is prohibited by law from disclosing any information regarding it.

During the search, investigators actively dug directly behind the Arroyo Grande home and underneath the rear deck, where they also ran the ground-penetrating radar. Buckets were removed from beneath the deck area.

Authorities also seized a red Volkswagen Cabriolet from the home's driveway. During a March 16 interview with KSBY, Paul's mother, Susan Flores, confirmed it belonged to her daughter. It was Susan's first-ever interview with a news organization. Δ