San Luis Obispo County's two largest police departments are struggling to keep up with a slew of officer vacancies, which is straining staff and overtime budgets. 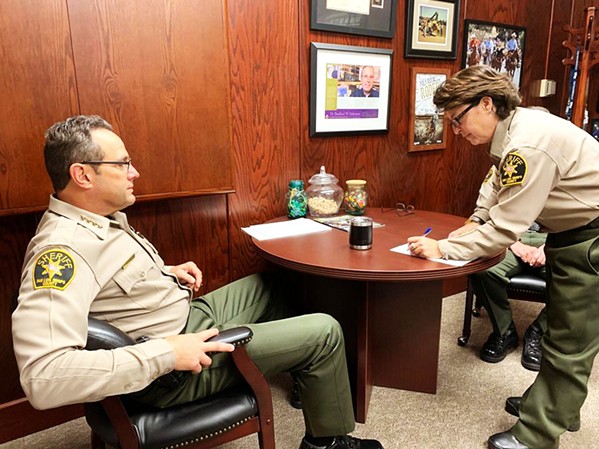 "Since 2011, we've had 140 employees retire," Parkinson told the SLO County Board of Supervisors on May 14. "It's been more difficult with the number of retirements to keep up."

The crunch has put more hours and responsibilities on the shoulders of remaining officers.

At the Sheriff's Office, eight deputy vacancies between the patrol and custody divisions contributed to a more than $3 million overrun of the overtime budget in the 2018-19 fiscal year.

Parkinson told county supervisors that his policy is to staff all seven patrol beats regardless of vacancies and absences. He said that wasn't the case before he was elected.

"I put a stop to that because we don't have an abundance of coverage anyway," he said. "It's just not appropriate for public safety."

Last year in the SLO Police Department, vacancies forced Cantrell to reassign officers who were in special assignments, like the Narcotics Task Force and the Downtown Bike Team, to standard patrol positions.

"Our officer recruiting and retention is tough," Cantrell told SLO City Council members at a May 7 meeting. "Nationwide, it's an issue for police departments."

The recruitment challenge has a few elements to it, officials say. One, according to SLOPD, is the increasing negative perceptions of police among young people.

"The national narrative of law enforcement has been perceived negatively, really over the last decade," said Brian Amoroso, an interim captain with the SLOPD. "We have a group of young people who have grown up where that's what their impression is of law enforcement."

Another stumbling block in hiring is a decline in lateral recruitment. Amoroso said that established officers at other agencies are less inclined today to relocate to departments like SLO—in part because of the city's tightened purse strings around pension plans.

Costly pension obligations have triggered new plans and policies in SLO, so a police officer considering relocating to the Central Coast may be looking at a reduction in benefits.

"We are only bringing people in at that lower tier [pension] level," Amoroso said. "With those changes in the pension system, coupled with the high cost of living, it's causing those candidates to give some pause."

Despite those challenges, both the Sheriff's Office and SLOPD said they're having success recruiting new cadets. But it's a lengthy process to get a cadet through training and into the field. Parkinson said it can take 18 months to complete police academy and field training.

"I think we've got some fantastic people coming in the door," Parkinson said, "[But] most of them are off-the-street untrained. The challenge is we want to attract that three- to seven-year deputy from another agency here."

In the meantime, vacancies remain unfilled and overtime wages continue to pile up. Parkinson said he's working to come up with new strategies to address the reliance on overtime work and to more efficiently handle vacancies.

In addition, both county and city departments said their latest labor contracts put them in a stronger position for lateral recruitment going forward, offering incentives like relocation packages.

"Our goal is to figure out what is the best formula to change this process," Parkinson said. "Ultimately, if we can save money and probably reduce burnout from employees, that benefits all of us." Δ