The San Luis Obispo Little Theatre’s production of The Best Man could not arrive at a more appropriate time. Into the heated final days before our next presidential election—as the airwaves become saturated with mudslinging ads and opinion polls fluctuate by the hour—enters Gore Vidal’s deftly written tale of political infighting and intrigue, directed by Brent Keast. Set in the summer of 1960, The Best Man follows two would-be presidential nominees vying for Democratic candidacy: the genteel, academic former Secretary of State William Russell (played by Daniel Freeman) and Sen. Joseph Cantwell (Chad Stevens), a younger, scrappier, “self-made man” type. Where Cantwell is unabashedly conniving, Russell resists stooping to dirty tactics, claiming he got into politics to put an end to backstabbing and mudslinging. 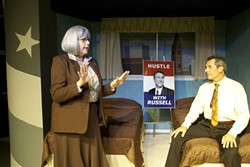 We meet Russell first, as he fields questions from reporters (“Do you think people mistrust intellectuals in politics?”) on the way to his hotel room. Russell is airily flippant in his answers, his quick wit skirting that line between confident charm and off-putting arrogance. Once safely inside his hotel suite with his wife Alice (Janice Peters) and campaign manager Dick (Todd Andoli), Russell lets his guard down, revealing a warm, thoughtful, and rather quirky personality.

Vidal’s sharp observations color the play’s dialogue. Giving a test grin in the mirror, Russell is absentmindedly lyrical about the strangeness of the smiling human face, “all those predatory teeth revealing our animal descent.”

Freeman, whom we saw last in the SLOLT’s delectable staging of Dinner with Friends, has a way of projecting trustworthiness and likeability, and as an audience we feel right away that we are on his character’s side. But even nice politicians, we will learn, are still politicians, able to switch on the practiced animal smile and cue the glib, alliterative sound bites at a moment’s notice.

A visit from Mrs. Sue-Ellen Gamadge (a bossy and comical Elaine Fournier), known in political circles as the “voice of the American woman, by default,” drops by to dispense unwanted advice about what “the women” want in a presidential candidate. (Never “women,” strangely, always “the women,” as if they were a foreign tribe and Mrs. Gamadge their only interpreter: “The women don’t like your trying to be funny all the time.”)

Former President Arthur Hockstader (played by the wonderful Ed Galena) drops by as well—to say hello and airily dangle the possibility of his endorsement. The exchange between Russell and the former president—a subtle, suggestive political dance—reveals a deep friendship that has been almost, but not quite, severed from political affiliations: Even if Hockstader decides to endorse Cantwell, he still thinks Russell’s a better person. Hockstader appears the aging Southern gentleman, with his white tuxedo, walking stick, and slight drawl, though Galena gives his character a bit of darkness and melancholy underneath his grand affectations.

The simple rearrangement of set furniture signifies the transition to the Cantwell camp, which feels a bit like a metaphor; a standing reminder of the similarity between the two even as they try to outsmart one another.

Hockstader now makes the same appearance at Cantwell’s suite, having exchanged his white tux for a black one (because he’s going to the dark side?). Stevens, who has a knack for playing charismatic sleazebags (he played the scandal-ridden radio DJ Alan Freed in 2011’s This is Rock ‘n’ Roll) gives Cantwell a kind of eager fakeness. Cantwell’s good at talking, but therein lies his greatest weakness, too. He’s so busy talking that he doesn’t hear Hockstader’s quiet admission that he’s dying of a terminal illness. Cantwell keeps talking and reveals that he’s unearthed some major dirt on Russell, which he’s planning to smear his opponent with. And that’s where things start to get very interesting indeed.

To some viewers, the first act of The Best Man may feel a little dry. But in its defense, it’s hard to enjoy a good political scandal without having a solid background on the players involved. Once this background is established, things heat up considerably. Hockstader, less turned off by Cantwell’s malicious plan as by his utter stupidity in sharing it, warns Russell of the impending attack. Russell’s people come up with a nice counter-smear, but Russell himself isn’t so sure he wants to lower himself to his mudslinging opponent’s level.

And then, of course, there are the women. Mrs. Russell and Mrs. Cantwell—the former a kind, no-nonsense older lady played by Peters; the latter a lean, finicky, quick-moving artificial blonde played by Brooke Foster—have their own miniature battle, expertly disguised as a press conference/photo op followed by some polite chit-chat over drinks.

Alice Russell, like her husband, tries to stay above the gossip and the subtle jabs at her modest appearance (She doesn’t wear makeup! She lets her hair be grey!). And just like Senator Cantwell, Mabel is an expert at appearing blameless while concealing a dirty agenda. Director Keast’s casting creates a purposefully jarring pair: Peters, as Mrs. Russell, radiates humility. Foster’s portrayal of Mrs. Cantwell, with her thick Southern accent, is syrupy and grating.

The year 1960 is one people like to remember nostalgically as “a simpler time,” before JFK’s assassination or the Watergate scandal created an atmosphere of fear and mistrust around politics in America. Vidal’s eloquent play, by contrast, reminds us of politics’ enduringly predatory nature.

Arts Editor Anna Weltner is not a crook. Contact her at aweltner@newtimesslo.com.