The art of the good deed 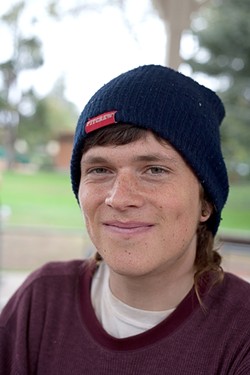 I don’t “get” face piercings. OK, sure, some little speck of a thing in a woman’s nose is fine, but eyebrows and lips? What the hell is that all about? I tell you, the kids these days! Geesh! But then every once in a while, these little ruffians surprise you, like they are right now on Sunday, Oct. 24, at Mitchell Park. Twenty-nine hungry people are eating a free vegan meal because some smelly, ratty-haired kids aren’t self-involved jerks. Instead they’re idealistic punks who want to change the world. It’s freakin’ heartwarming, I tell you!

Food Not Bombs isn’t a nonprofit organization. In fact, it’s not organized at all. When I ask Trevor Barrick who’s in charge of the local chapter, the answer is “no one.” It’s also not a charity. Sure, it feeds the hungry, but these kids are activists first and foremost. They’re like little commies or something. 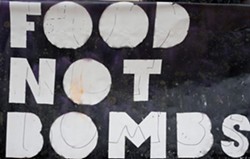 Idealists! Huff! They’re the worst … except when they’re not. Barrick and his compatriots hit Farmers Market every Thursday, pushing around a shopping cart and soliciting donations.

With Barrick’s encouragement, I take a plate (no paper or disposables; these kids take silverware and china and wash them after) and load up on curried rice and vegetable stir-fry, with tortillas and guacamole on the side. Pretty tasty, I must admit.

“It’s always vegan,” Barrick says. “The whole thing was started in the early ’80s by anti-nuclear activists, but we’re also against the military. I don’t know if it’s true, but they say one week of the military budget could feed the whole world for a year. It’s like that old bumper sticker: We’ll be happy when the schools are fully funded and the military has to hold bake sales.”

So anyway, I still think face piercings are stupid looking, but these kids are all right.